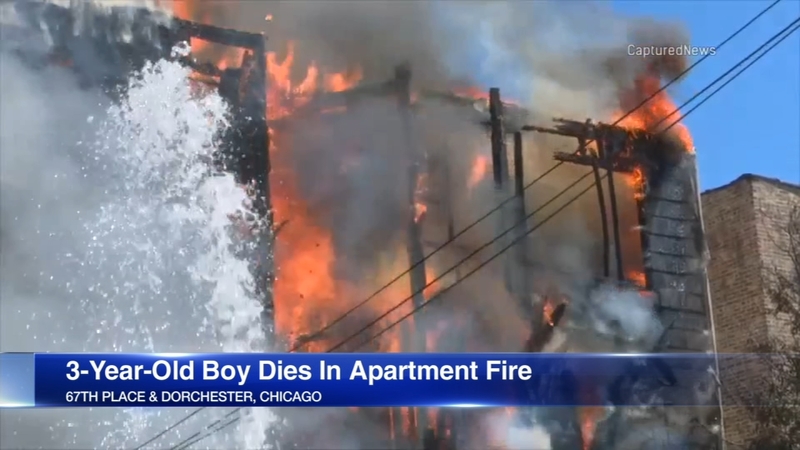 CHICAGO (WLS) -- A 3-year-old boy died Sunday afternoon after being pulled from an extra-alarm fire in the Grand Crossing neighborhood, the Chicago Fire Department said.

Early Sunday, firefighters battled the 2-11 alarm fire in a three-story apartment building in the 1400-block of East 67th Place. The boy was trapped on the second floor.

The boy was transported to Comer Children's Hospital in critical condition, but later pronounced dead, according to the Chicago Fire Department.

The boy was identified as Maqkwone Jones, according to the Cook County Medical Examiner's Office.

A Chicago firefighter was also transported to Northwestern Memorial Hospital in stable condition after suffering from overheating and a 29-year-old man was transported to the University of Chicago Hospital with symptoms of smoke inhalation.

It is not known what caused the fire and immediately unknown if the building had working smoke detectors.

Massive cloud of smoke near 67th Place and Dorchester. Chicago Fire on the scene. pic.twitter.com/tJmPl28HbC

Shot of the building in flames. Working to get more info. pic.twitter.com/tUjzYG9S7X