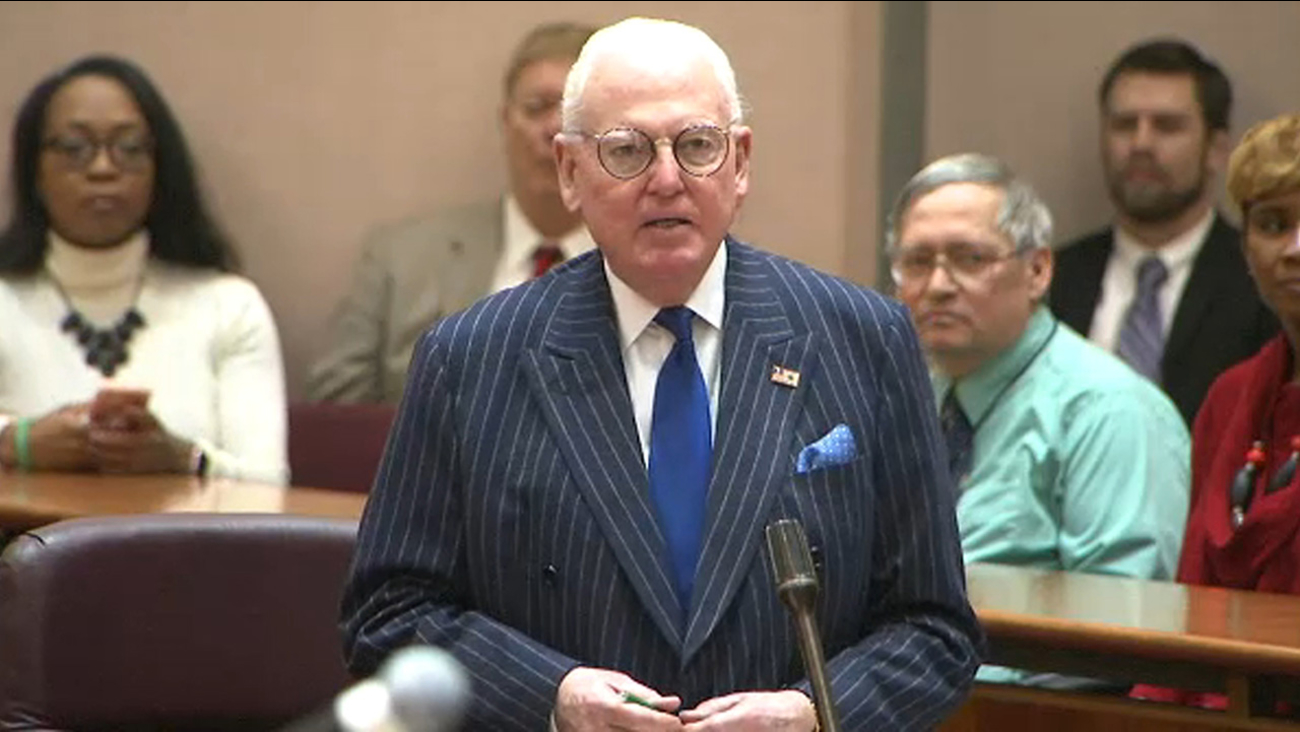 CHICAGO (WLS) -- The Chicago Fraternal Order of Police (FOP) is defending and explaining its endorsement of embattled Ald. Ed Burke (14th Ward) despite the federal corruption charges now filed against him.

"We made the endorsement based on what he had done in the past, for police and fire that he made sure disabled officers, that he made sure their bills were paid, and he was a resource that we turned to many times and has been a friend to the FOP," said Kevin Graham, FOP Lodge 7 president.

Graham said the board had voted to endorse Burke before the FBI raids on his office that led to him being charged by federal prosecutors with attempted extortion for trying to steer business to his property tax law firm from a restaurant seeking a building permit in his ward.

"We didn't feel it was appropriately to suddenly withdraw our support simply because of some allegations that are being made," Graham said.

But that decision, in light of the FBI raids on Burke's offices at city hall and in the 14th Ward are drawing some questions and criticism from some of the mayoral candidates.

"Does it hurt the FOP, I think people may be shaking their head and saying what's going on, why are they doing this," said Bob Fioretti.

In light of the scrutiny of the FOP for its reactions to the conviction of former Chicago cop Jason Van Dyke for the murder of Laquan McDonald and the acquittal of three officers accused of covering up for Van Dyke, others saw the FOP as out of touch.

"I just think that it really shows there's a certain amount of tone deafness to it. I understand supporting an individual they feel has supported them, but in light of everything that's happened, not just with Ed Burke being charged, not just with the corruption that's been uncovered, you at some point have to be willing to take a stand for the right thing," said Amara Enyia, who is running for mayor.

"I think it sends the wrong signal quite frankly, you know, I really do," said Paul Vallas, another mayoral candidate. "It just doesn't make sense particularly from what we know in the pay to play culture the machine and the political environment that we currently exist in, I just don't think it was, I don't t think it was a smart decision."

Others defended the FOP's right to endorse Burke.

"Labor organizations are not the employees in the group and vice versa, so the FOP is one thing, the Chicago police officers, men and women, who I think do a great job in protecting us are another thing," said mayoral candidate Gery Chico.

"Complicated question because obviously in this country you're considered innocent until convicted, right and I think we have to remember that's the standard of law in the United States," said Garry McCarthy, former CPD superintendent and mayoral candidate. "At the same time Ed Burke has been a great friend to the police. So it's not so surprising. That the FOP would support them. They make decisions and you have to stand by them. If they want to support Ed Burke that's their absolute right, they've chosen not to endorse anybody in this race which I do find a little bit troubling quite frankly because I've walked in their shoes for thirty five years."

Graham did say the FOP will likely endorse someone after the Feb. 26 election but before the expected run off in April.

Still others see the FOP's continued support for Burke as an example of a deeper problem.

"It speaks to the FOP's, I think what you call a hard head type of mentality where they refuse to move to the right lane even when it's obviously where they should be moving. It's sorta like we know the FOP should be looking to do everything that they can to protect their members and they refuse to because they're no better than the NRA," said mayoral candidate La Shawn Ford.
Report a correction or typo
Related topics:
politicschicagoloopchicago city councilelectionchicago police department
Copyright © 2022 WLS-TV. All Rights Reserved.
TOP STORIES
Security guard hurt after confrontation at suburban Walmart: police
Some peanut butter recalled for potential salmonella
Security guard shoots man in buttocks at Millennium Park
'Absolutely terrified' teen boy dies hours after 'sextortion' scam
Wedding guest budgeting tips
'Multiple people' injured in shooting in northern Indiana: police
10 shot in weekend violence, Chicago police say
Show More
Chicago mass shooting victim ID'd as father of 2, with twins on way
Chicago police warn of robberies on Near North Side
At least 1 dead, 44 injured after tornado strikes northern Michigan
Weather for Preakness could be hottest in history of race
First formula flights from Europe to arrive this weekend
More TOP STORIES News