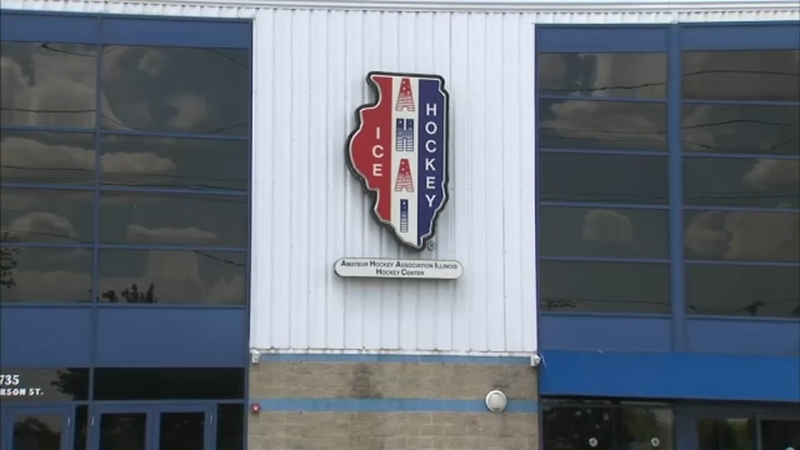 "I was very much removed from my family and lived a very limited, lonely and unstable life during my teenage years," Gee said.

However, after meeting renowned hockey coach Thomas "Chico" Adrahtas, he said he, Michael Sacks, Christopher Jensen and others were groomed and sexually abused at the hands of Adrahtas.

Adrahtas allegedly forced them to be blindfolded and bound as he performed sex acts on them.

"I lost my family over my degenerative trauma that I struggle with every day. Every day. Basically every relationship that I've ever had I've alienated everybody that's ever loved me," Gee said.

"For 40 years Chico Adrahtas knew he was protected because of his successes on the ice rink," Economakos said.

Now, Gee has filed in federal court, a suit against the University of Minnesota, USA Hockey, Amateur Hockey Association Illinois and Thomas Adrahtas.

"In February 2010, upon receiving a formal allegation of sexual abuse that occurred 26 years earlier, AHAI suspended former coach Thomas "Chico" Adrahtas...He was no longer allowed to coach any youth hockey program in Illinois."

A spokesperson for AHAI said they reported the alleged sexual abuse to the Cook County and DuPage States attorneys and no action was taken against their leadership.

Roosevelt University, said in part: "We have steps in place to make sure that our students and athletes are safe and feel comfortable voicing any and all concerns. The safety and well-being of our students, faculty and staff is our utmost priority."

The University of Minnesota told ABC 7 they have not reviewed the lawsuit and don't typically comment on pending litigation.

Adrahtas himself and USA Hockey did not respond to requests for comment.

"Had they done what was right, Chico never would have gotten to me, the others before me, and, God forbid, anyone who was after me," Gee said.

Gee and Sacks created a foundation to help survivors of sexual abuse. You can learn more by the visiting Survivors for Change website.

"In February 2010, upon receiving a formal allegation of sexual abuse that occurred 26 years earlier, AHAI suspended former coach Thomas "Chico" Adrahtas pending a disciplinary hearing, which Mr. Adrahtas declined to attend, leaving his suspension in effect indefinitely. He was no longer allowed to coach any youth hockey program in Illinois. AHAI officials immediately notified USA Hockey and reported the alleged sexual abuse to the State's Attorney's offices of DuPage and Cook counties, as well as to the now-deceased hockey director at Robert Morris University, where Mr. Adrahtas was then coaching. AHAI has no oversight of college hockey.

In 2020, the U.S. Center for SafeSport opened an investigation of individuals in AHAI's leadership in 2010 to investigate whether they received a report of child sexual abuse by Mr. Adrahtas and failed to report the information. In April 2021, SafeSport advised those individuals that it was closing the matter and taking no further action. SafeSport did not provide any investigation report or factual findings regarding the AHAI leaders' actions.

AHAI respects the courage and credibility of those individuals who have come forward to tell their traumatic experiences and they should be believed. AHAI strongly condemns sexual misconduct and has zero tolerance for any conduct that poses a risk to the health, safety, and well-being of any of its players and participants. AHAI is confident that the association acted responsibly in handling the 2010 allegation and that it met or exceeded its legal, moral, and ethical obligations.

Read full statement from Roosevelt University: Roosevelt University values every member of its community. It is important to the University that it works to ensure that all students, faculty and staff feel comfortable coming forward with concerns at any time and will investigate them promptly and thoroughly.