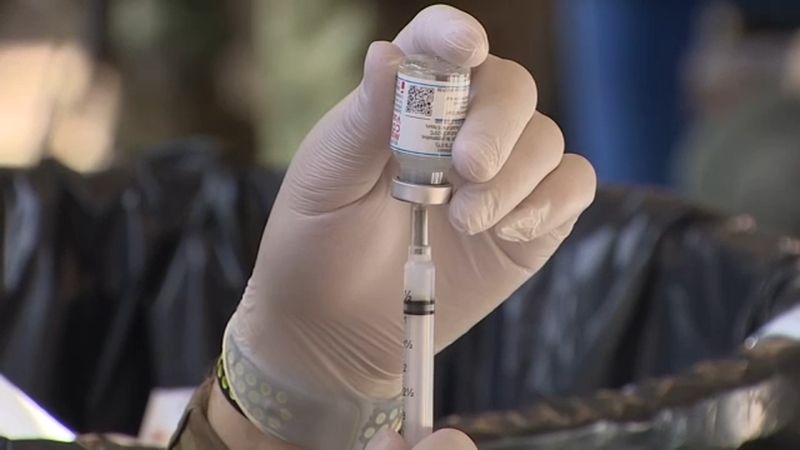 On Monday, April 12, all residents 16 and older will be eligible to get a vaccine in Illinois. However, 16 and 17-year-olds must get the Pfizer vaccine only.

Illinois! Time to step up and get your shot! ALL Illinoisans are eligible for the COVID-19 vaccine beginning tomorrow, April 12th! #VaxUpIL pic.twitter.com/HQpJwhH3uL

While the state's expansion comes a week before President Joe Biden's announcement for expansion for all adults in the country, Chicago will wait until April 19, the date the president hopes all states can meet for expansion. However, Chicago residents are eligible to get vaccinated at suburban sites.

The state expects demand to increase with expanded eligibility and asks for patience, even as the state reports an average of 100,000 shots per day. The state also pointed to issues with Johnson & Johnson supply as another reason for patience.

"We try to push our partners to get every dose out the door, and to make sure that we're doing as many vaccinations as possible," Gov. JB Pritzker said.

Governor JB Pritzker announced thousands of new COVID vaccine appointments will be coming to the Chicago area next week even as vaccine supply becomes more limited.

With the expansion, the governor said 150,000 additional vaccine appointments would be made available at 11 state-run sites in Cook County and the collar counties. That is in addition to doses being given at local hospitals and pharmacies.

"Even with all of these new appointments, there will not be enough vaccine in week one to get everyone that wants to be vaccinated a dose But vaccine doses will be arriving more quickly than ever before and the public health system is doing everything in its power to get these vaccines in the arms of our residents as quickly as the federal government can deliver them," the governor said.

Pritzker said a quarter million doses would be coming to Cook County and the collar counties next week alone. He added that as of Thursday there are more than 1,000 vaccination locations in Illinois, including 20 National Guard operations as well as at Costco, CVS, Walgreens, Wal-Mart, Jewel-Osco, Mariano's and more.

But with 15 million doses of the Johnson and Johnson vaccine being destroyed due to contamination, the supply to Illinois, which this week was more than 148,000, will plummet to only 17,600 next week.

Chicago is also impacted, and the city's top doctor said that low allocation could continue for three weeks.

The additional doses for the Chicago area will go to state-supported sites outside the city, but the governor said Chicago residents, if they can make it to the suburbs, are eligible for those appointments.

The Chicago Department of Public Health reported a high demand from residents for the single-dose shot.

The United Center drive-thru will continue to administer second doses of Pfizer for people who already received their first dose at the mass vaccination site since it opened in early March, according to the announcement.

Governor Pritzker says there's shouldn't be much of an impact in Illinois, since there are millions of vaccine doses in reserve.

Chicago will move into Phase 2 of vaccine eligibility on April 19, which means everyone age 16 or older will eligible to receive a vaccine. However, officials added that you must be at least 18 to receive a shot at a city-run site, including the United Center.

Starting Monday, appointments for people eligible in Phase 2 will begin to be posted to Zocdoc and said new appointments will be added throughout the week.

Vaccination appointments on Zocdoc are only available for City of Chicago residents, and City vaccination sites cannot vaccinate minors, officials made clear.

It was the first release of appointments under the eligibility expansion that includes individuals 16 years and older and includes appointments for all three authorized vaccines - Pfizer, Moderna and Johnson & Johnson - at the following Cook County mass vaccination sites.

The COVID-19 vaccine is free to everyone, regardless of insurance or immigration status. You cannot be denied a vaccine if you do not have insurance.