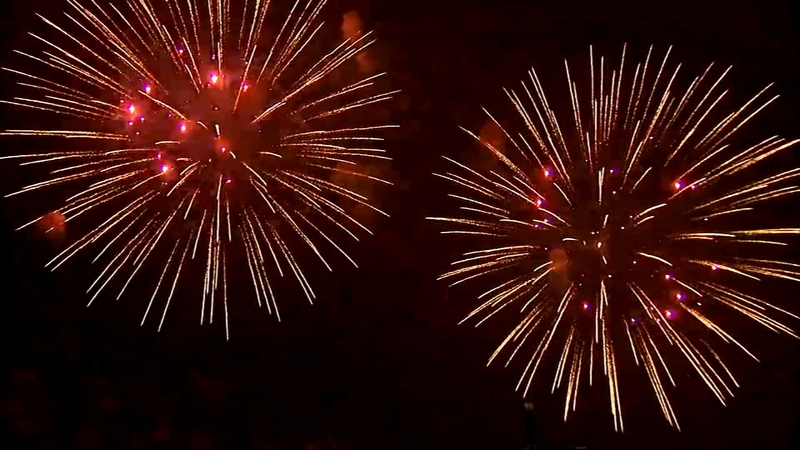 CHICAGO (WLS) -- Fireworks lit up the night skies as celebrations dodged storms in the city and the suburbs Wednesday night.

Thunderstorms and lightning caused several fireworks displays in the western suburbs to be delayed or canceled, including the one at Naperville's Ribfest.

But the storms stayed away from Chicago long enough to allow the party at Navy Pier to go on as scheduled.

Hundreds of thousands packed the pier to watch the big show unfold. Around 8:30 p.m., Navy Pier announced that they were at maximum capacity and that the public entrances to the pier were closed.

It was a star-spangled celebration along the lake as the skies over Navy Pier burst with patriotic pride.

Where to see fireworks in Chicago and the suburbs

"It's a great atmosphere here, and all the happy faces are surrounding here," said Navy Pier visitor Nadeem Ahmed.

It's Nadeem Ahmed's birthday, born on the Fourth of July. He and his family among many who arrived early to stake out their spot on the pier.

At the entrance, there was a sea of officers and private security. Every visitor underwent bag checks and wanding before entering.

"Obviously safety and security is a top priority for Navy Pier and for its guests, and so we're making sure people are having a comfortable experience, and in order to do that we've got wanding and bag checking in place," said Navy Pier Spokesperson Payal Patel.

"We've got so many things going on in the world today, and I'll tell you, safety is a big thing, and I did not mind it at all," said Navy Pier visitor Melissa Baker.

Chicago Police also patrolled the beaches as part of a citywide surge of 1,500 additional officers, which helped to keep the focus on food and family.

A marvelous thing and a marvelous night. The Navy Pier fireworks are an annual reminder that the best part of independence is celebrating together.

Revelers had to fight to stay cool under the hot summer sun, but that's didn't stop people from outdoor celebrations.

People are flocking to Chicago's lakefront to celebrate America's birthday ahead of the big fireworks show at Navy Pier.

"It's a beautiful day in the city of Chicago. Any day you're outside near the lake it's a good day," said Ryan Wilkin who was on the lakefront Wednesday afternoon.

Ryan Wilkin and his father, Steve, were two of the thousands that flocked to the lake front to celebrate America's birthday.

"It's kind of like your midway celebration. Your midway holiday," said Steve Wilkin.

Leading up to the big fireworks show, families were out celebrating in true Fourth of July fashion, donning their red, white and blue best.

At 31st Street beach, there were many taking a break from the heat for a dip into Lake Michigan as others sizzled by their grills.

At Navy Pier, people took advantage of the weather to get out on the lake and enjoy the views of the city from boats or special cruise liners.

"This is hands down the busiest day of the year for us. This is the only day of the year where we end up reaching capacity and having to close our gates as a result so get here early," said Navy Pier Spokesperson Payal Patel.

But more than the fireworks, fashion or the food, the people we spoke with say the Fourth is about celebrating freedom and family time.

"Nothing better than being with friends and family. No doubt about that. We work too hard and we don't spend enough time with our family," said Ryan Wilkin.

"You get out and enjoy life. That's what it's all about: freedom, peace, love understanding," said Lisa Tyree.

Simultaneous fireworks displays erupted over a packed park in Westmont. From the ground and from the sky, a carefully timed show suddenly had to go off a little early when weather threatened to cancel it at the last second.

And just before the display- a sign lit up and changed a couple's life.

It's been a full day of celebration here.

"It's nice, it's quiet, it's a lot of just togetherness, everyone just out here to love each other," said Westmont fireworks attendee Latoya DeQuir.

And Westmont is a place that exemplifies what America is.

"If you walk through this park you will see all nationalities, many different languages, it's a melting pot, it really is," said Westmont Park District Director Bob Flek. "I describe it as a Norman Rockwell painting in the park come to life."

"Whenever you come here you feel like home," said Ribfest attendee Woody Scherer.

"The ribs are awesome, the people are even better and the music's the bomb," said Ribfest attendee Alex Ivelik.

Melissa Etheridge entertained the crowd before a moment of pause under fireworks to remember what America is all about. 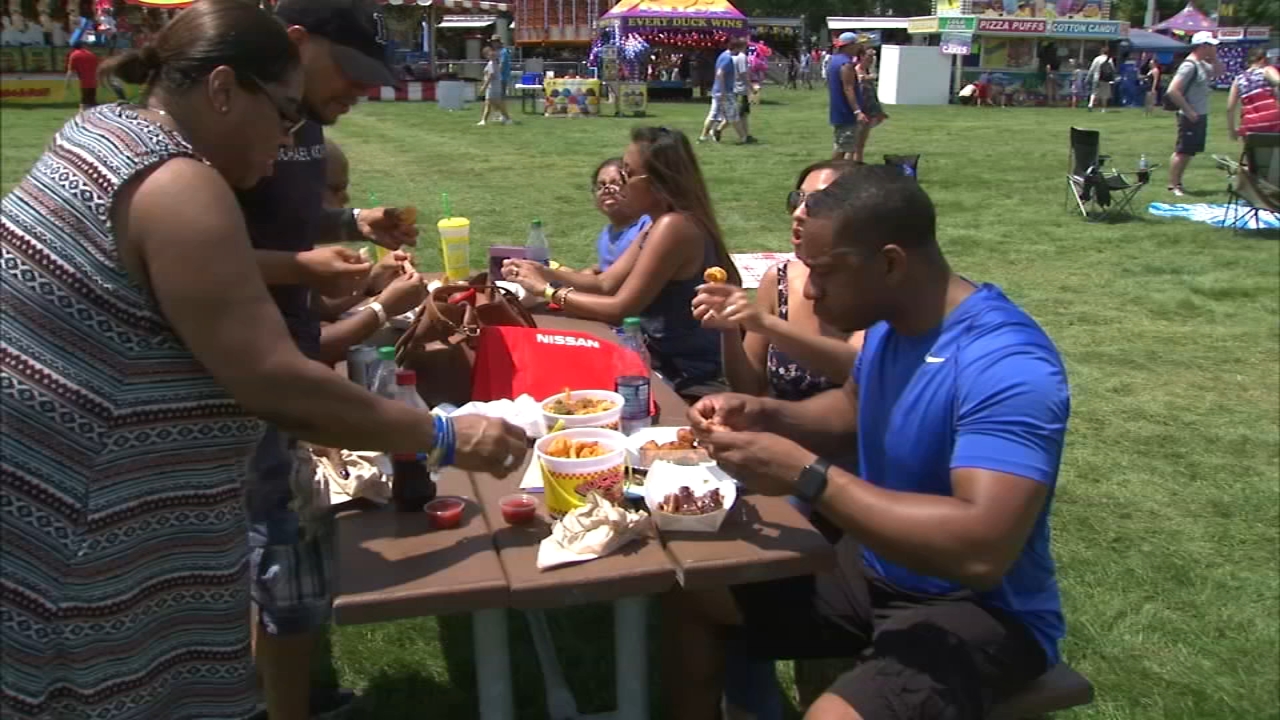 Naperville Ribfest gets underway Wednesday
You can find good barbecue and some of the best music acts in Naperville at Ribfest.

BEHIND THE SCENES AT ITASCA'S FIREWORKS SHOW

Have you ever wondered what it takes to make these celebrations go off without a hitch? ABC7 went behind the scenes for the big fireworks celebration in Itasca.

John Garcia finds out what goes into creating a top-notch fireworks display.

Wynn Cramer has been setting up the fireworks show on the scene at Hamilton Lakes in Itasca for two decades. He's worked some of the biggest firework shows in the world with Melrose Pyrotechnics. He says this one ranks right up with the best as it's tightly choreographed and set to music.

The annual show draws crowds from all over the Chicago area.

"A lot of the town is drawn for economic development and clearly the more people that see this park and the Grade A park we have now that 390 is completed, it will help bring the tenants and crowds here," said Itasca Mayor Jeff Pruyn.

The show also features live music before the fireworks. Fan started gathering to claim their spot early. The local band Maggie Speaks, is going to be joined by Fran Cosmo, the lead singer from the rock group Boston at this evening's show.
While the music is sure to draw fans from all over, it is definitely the fireworks that are the star of the show. The split second timing is all automated from a board.

Bob Kerns retired from Melrose earlier this year, but he continues to work on this show. And will see it in person for the first time this evening.

The band starts around 8 p.m.

Crowds lined the streets for Fourth of July parades across our area. That's also where the candidates for Illinois governor hoped to spread their messages to voters, months ahead of the November election.
EMBED More News Videos

Like marching bands and beauty queens, a Fourth of July parade is never without politics - especially during an election year.

From West Suburban Aurora to Arlington Heights to Hyde Park in Chicago, everybody loves a parade, especially politicians during an election year.

Like marching bands and beauty queens, a Fourth of July parade is never without politics. Governor Bruce Rauner was in Arlington Heights shaking hands with what appeared to be a Rauner-receptive crowd.

"We are the greatest nation on earth because of our heroes, our veterans we celebrate our history tradition of freedom and opportunity," said Gov. Bruce Rauner.

Celebrating freedom and opportunity with a democratic friendly crowd was Rauner's challenger JB Pritzker. The annual Hyde Park parade was one of four stops on his schedule Wednesday.

With diversity on display, democratic politicians say this year's Fourth of July message is about celebrating that diversity during a time they say some of our freedoms are being challenged.

"Those of us who believe this is a difficult and problematic time for our country need to stand up for it. The way we do it is to come together and express our patriotism," said Cook County Board President Toni Preckwinkle.

For some here, you don't have to be an American to express patriotism. Lucita Balenzuela is a green card holder from the Philippines.

"We are excited to see this because it's our first time to see a parade," said parade attendee Lucita Balenzuela.

Not every democratic politician running for election or re-election was here today. Mayor Rahm Emanuel didn't have anything on his public schedule. He was spending the Fourth with his family.

While the mayor was missing from a parade full of flag-waving voters, some celebrated their freedom with a message for Emanuel. Cassie Creswell with the parent group Raise Your Hand Action dressed up as an elected school board bill.

"Today is about democracy and it's about the birth of American democracy and we still don't have basic democracy here in Chicago, we don't elect our school board," said Cassie Creswell with Raise Your Hand Action.

While politics comes with the territory on the Fourth of July, many here say the day was about coming together with neighbors.

That's what ABC7's Judy Hsu did earlier in the day. She celebrated her son's little league baseball team at Hinsdale's parade. Check out Judy in the video below, doing the "YMCA"on the back of a tow truck.
EMBED More News Videos

Judy Hsu made an appearance in the Hindsdale July 4th parade with her son's baseball team.