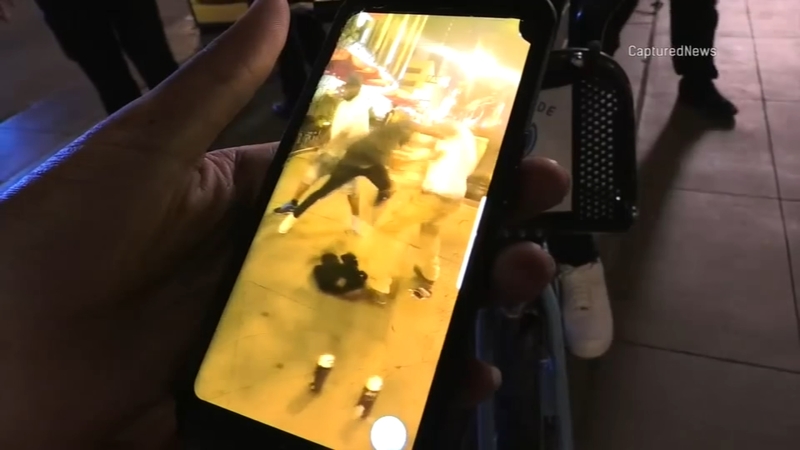 CHICAGO (WLS) -- Chicago police said a fight escalated to a stabbing late Monday night in the Loop. A witness captured the violent attack on video.

A group of people were walking on the sidewalk on East Lake Street between North State Street and North Wabash Avenue around 11:55 p.m., when they began arguing with three men. Police said that's when a fight broke out.

"I was around the corner and these guys seem to be attacking these guys on the bikes with a knife. They were stabbing them - and they stabbed some girl as well - and they stormed off," said Anthony, another witness.

Officers ran to the CTA Green Line platform at State and Lake to search for a suspect when a man - not related to the stabbing - ended up aggressively approaching officers. Police said they used a Taser to stop him. He was taken into custody and transported to the hospital. An officer was also treated and released.

People who work downtown said crime seems to be more prevalent in the area recently, and has become something they need to always be aware of.

"I'm always alert. Even though you have your earphones in, you still want to be alert of your surroundings," Shaunna Russell said.

"I work in the evening. I work 3 p.m. to 12 a.m. You have to watch yourself every time that you get on the train. Watch your surroundings. It's a shame, with things going on. It's got to stop," Lascan Hudson said.