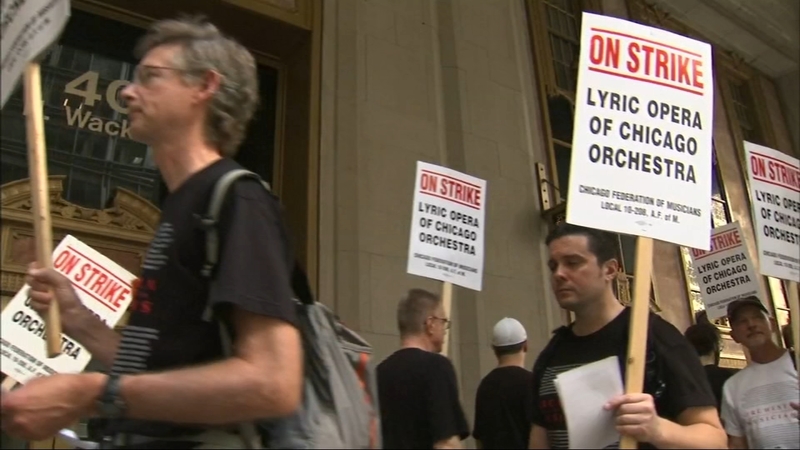 CHICAGO (WLS) -- Chicago Lyric Opera Orchestra musicians went on strike Tuesday to protest cuts after they have not been able to negotiate a new contract.

The musicians, represented by the Chicago Federation of Musicians, are employed by the Lyric Opera of Chicago. Their union contract ran out in June and leaders say they have been negotiating since with little progress.

"Over the last six years, the budget of the Lyric Opera has increased by $24 million. None of that has come to the musicians. In fact, our share of the budget has gone down from about 14 percent to below 12 percent," said Kathleen Breuer of the musician's union.

The orchestra said management is demanding cuts that would "decimate" and "diminish" the orchestra. Among the cuts are the elimination of five positions, 8 percent pay cut, reducing the number of performances and working weeks from 24 to 22, and eliminating all of Lyric's popular radio broadcasts, according to the orchestra's statement.

Lyric Opera executive director Anthony Freud said: "Our business environment has changed and we have to change with it. Essentially we want to continue to paying good dates for work done but we cannot continue to pay for work not done."

On Tuesday, musicians picked outside the theater. There was no music inside, but they did perform outside on the picket line.

So far the Opera has had to cancel two performances.

Depending on how long musicians remain on strike, they may have to cancel more.

Both sides say they are intent on preserving the quality of the opera.

"I think the biggest challenge for Lyric is adjusting the organization to the realities as they are not as we wish they were. All of us have fond memories of when we did 90 shows a year. We're now doing 50 shows a year," said Lyric Board Chairman David Ormesher.

"I hope that we will be able to reach a resolution. We are certainly willing to talk about it. We're passionate about this cause and we don't want to see this become a shadow of its former self," said Kathleen Breuer, who plays violin.
Report a correction or typo
Related topics:
arts & entertainmentchicagolooplive musicstrikeunions
Copyright © 2022 WLS-TV. All Rights Reserved.
TOP STORIES
10 shot, 2 fatally, on Near North Side
13-year-old carjacking suspect critically injured in police shooting
City Council to take up ordinance on curfew changes
Marine veteran seriously injured in Irving Park hit-and-run
PGA Championship picks, predictions with ESPN Chicago's Randy Merkin
Teen shot and killed in vehicle on Far South Side ID'd by ME
Motorcyclist strikes, kills man crossing street on NW Side, police say
Show More
Celebrate National Streaming Day with Hulu for $1/month for 3 months
CTU votes for new president
Disney celebrates National Streaming Day with drone show over DTLA
City Council committee to vote on NW Side casino plan
Oakbrook Terrace fights back after red light camera permit revoked
More TOP STORIES News