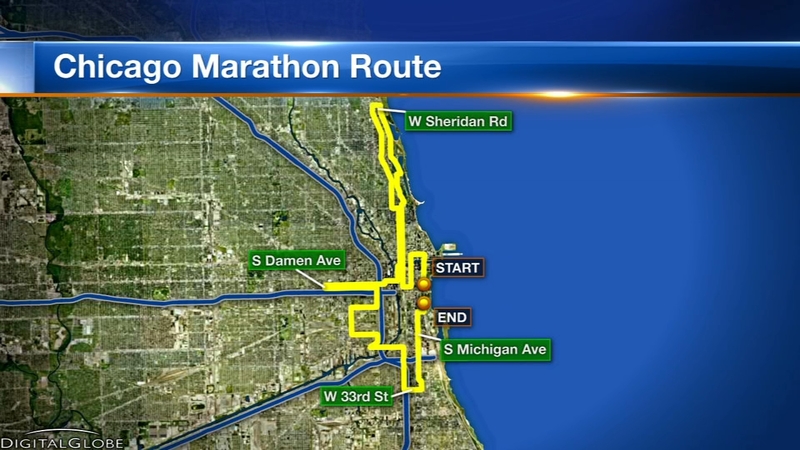 CHICAGO (WLS) -- The Chicago Marathon gets underway this Sunday and some streets have already been closed down for the annual event.

More than 40,000 runners are expected to take part in this year's race, traveling 26.2 miles through 29 neighborhoods.

Several changes were made to the race course this year. To view the full course map, click here.

Parking restrictions will be in effect along the course and will be strictly enforced, officials said.

The Chicago Marathon draws runners from every state and most countries throughout the world - and that makes it a potentially attractive target for protesters.

CHICAGO MARATHON COULD BE TARGET FOR PROTESTERS

The Chicago Marathon draws runners from every state and most countries throughout the world - and that makes it a potentially attractive target for protesters. Race organizers are taking extra precautions to ensure security.

"This event is a celebration of humanity. It's about emotion. It's an event that allows individuals to express themselves and it's an event where people come together," said marathon director Carey Pinkowski.

But it also comes at a time where racial tensions are high in anticipation of a verdict in the murder trial of former police officer Jason Van Dyke for the killing of Laquan McDonald.

Protesters have recently targeted large city events, like shutting down Lake Shore drive before a Cubs game, among other actions. And several have talked of targeting the marathon because of its city-wide course and worldwide audience.

"I think people are more worried that they have been in other years. You think about it once in a while. But mostly you're focused on the next mile or the next water stop," marathoner Henry Kozlowski said.

The marathon attracts runners from 140 countries and more than 1.5 million spectators on a course that runs through numerous neighborhoods on the North, South and West sides.

Much of the visible security has been focused on the finish line in Grant Park. But Pinkowski said security will be in place throughout the course.

"I'm confident in our partners in the Chicago Police Department, our federal agencies and the resources we have," Pinkowski said.