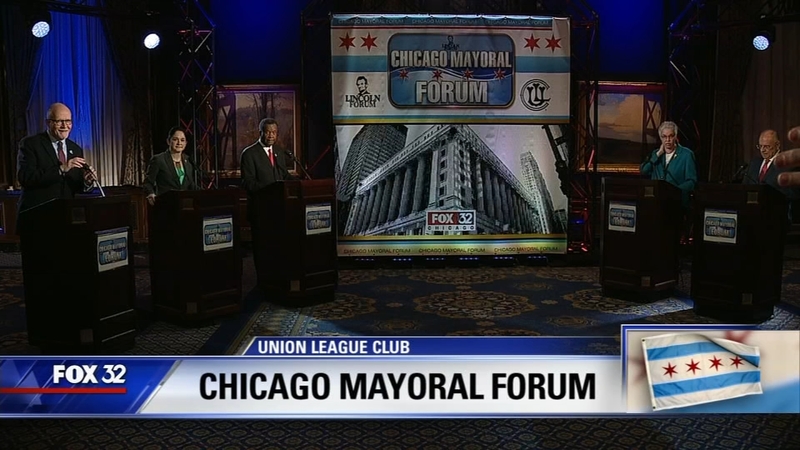 CHICAGO (WLS) -- Five candidates for Chicago mayor faced off in a forum Thursday evening, but the drama started well before they took the stage.

Bill Daley dropped out of the forum just hours before it was supposed to start. Earlier in the day candidate Amara Enyia went to court seeking an emergency injunction to stop the forum because all candidates weren't invited. A judge denied that request

Candidates traded barbs over corruption at City Hall, campaign donations and working with President Trump, but some of their sharpest attacks were directed at Daley, who bailed at the last minute.

Daley skipped the forum to attend an endorsement from Plumbers Local 130 UA. He got cheers from the union, but jeers at the candidate forum.

"I'd like to say hello to Mr. Daley if he's at home watching," candidate Susana Mendoza said. "We miss ya."

"This is the same person who put out a press release calling for a number of televised forums, and he misses the first one," said candidate Gery Chico.

"I always had an ambition to replace a Daley," Vallas joked.

"I've gone to 11 or 12 forums, debates, whatever you want to call them. I think everybody knows where everybody stands on this stuff, let's get on, talk to normal people," Daley said.

Like Daley, Toni Preckwinkle found herself on the defensive about fundraising and, in particular, union support that has contributed more than $1.5 million to her campaign.

"You cannot in good conscience argue the interests of the citizens of Chicago when you are a wholly owned subsidiary of those two unions," Chico charged.

"Throughout my political career I've raised money as broadly as I possibly can," Preckwinkle responded.
Candidates were also asked if they could work with Donald Trump to help Chicago.

"I'm a businessman. I will work with anybody who's gonna give money to help the community," said candidate Willie Wilson.

"At the end of the day I'm not gonna turn anybody away who wants to give me money," Vallas said.