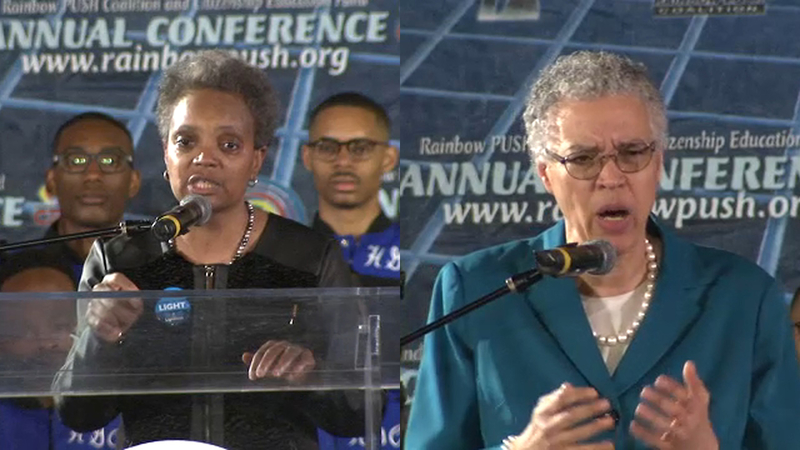 Lori Lightfoot and Toni Preckwinkle faced off a day after former mayoral candidate Willie Wilson, who came in fourth in the Feb. 26 election, announced his endorsement for Lightfoot.

At the Rainbow PUSH forum, Rev. Jesse Jackson did not endorse either candidate, but simply introduced them both.

"I've tried to get out and talk to the constituents all across the city and I am going to do that. I'd be grateful of course for support of some of the other candidates, but I want to get to their voters," Preckwinkle said.

Preckwinkle's campaign has charged that Wilson didn't give their candidate his endorsement because she wasn't willing to pay his campaign costs or allow him to appoint key positions. Wilson's camp denies that as does Preckwinkle's challenger.

"The noise that we heard. The attacks, the rolling around in the mud, that doesn't put food on people's tables," Lightfoot said.

Chicago voters head to the polls on April 2 and will elect the city's first African American woman as mayor.

Each candidate continued to promise that they would grapple with issues like crime and neighborhood investment, while also coming off as progressive and independent.

Lightfoot and Cook County President Toni Preckwinkle were the top two finishers in the Feb. 26 election and will be in the runoff election on April 2. Wilson finished fourth in the election, behind Lightfoot, Preckwinkle and Bill Daley.