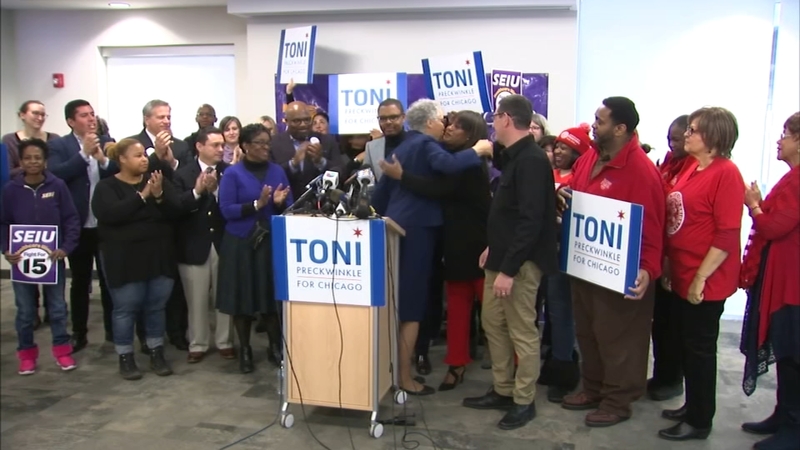 CHICAGO (WLS) -- The Chicago mayoral race continues to gear up with the first television ads launching Thursday and another round of union endorsements.

It's another sign of how some of the big name candidates are not wasting time in their effort to drum up support and set themselves apart.

Paul Vallas, who enjoyed some popularity with teachers while serving as Chicago Public Schools CEO, downplayed the CTU endorsement.

"I'm gonna communicate directly with to the teachers and I anticipate that the majority of teachers, both current and retired, will endorse me," he said. "Also let me point out that I think 40 percent voted not to endorse her and 10 percent took no positions. So if it was an endorsement it wasn't a real strong one."

Union support means foot soldiers and money for Preckwinkle, who's in the middle of the fundraising pack, but she may not get the millions that the teachers' union gave to Chuy Garcia four years ago.

"Our union is not a piggy bank," said Jesse Sharkey, president of the Chicago Teachers Union. "I will say there's no way we're going to match dollars with the corporate-funded candidates, the candidates you know that have big law offices downtown and works for Big Business."

Sharkey's comment appeared to be a shot at Bill Daley, the top fundraising candidate at the moment, who Thursday became the first to launch a TV ad in which the announcer says, "Bill will put a moratorium on tax hikes to keep families in their homes."

"We shouldn't be freezing property taxes for everyone, we should be forcing the wealthiest and owners of skyscrapers to pay their fair share, while lowering taxes for low-income and citizens living paycheck to paycheck," Chico said.

As for the CTU's support, a spokesperson said she did not know exactly how it breaks down, but she said confidently that there was not a single vote for Vallas.