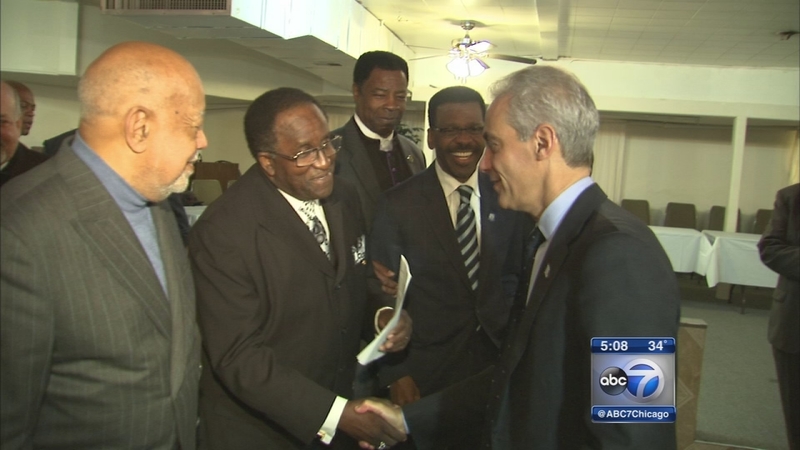 CHICAGO (WLS) -- The African American vote is expected to play a key role in April's runoff election for Chicago mayor. The race between Mayor Emanuel and Jesus "Chuy" Garcia is creating a divide in support by African-American minsters.

The fight for the critical African-American vote became a kind of "holy war" Tuesday as Mayor Rahm Emanuel trotted out another set of black preachers who have endorsed his re-election.

The two dozen or so ministers pastor small- to medium-sized black churches all over the city. Some took not-so-subtle jabs at Garcia's lack of experience compared to Emanuel.

"How can never-been-there tell been-there how to get there?" asked Bishop Joann Long, who supports Mayor Emanuel.

"We need you to join us and take the souls to the polls, said Rev. Walter Turney, who also supports the mayor.

"If we're going to get to the city that we want to be and everybody get there together, the pulpit and the podium have to be pointed in the same direction," Emanuel said.

But Chicago's African-American religious leaders are divided over which candidate they support.

"If they look at the issues and listen they would probably have a different idea," said Rev. Leonard Deville, who supports Garcia.

"Campaigns try to buy people," Deville said. "And some people will fall for two, three dollars."

African-American ministers have played a role in Chicago politics for many decades. Richard M. Daley and his father before him had a long roster of black preachers who endorsed them repeatedly.

But do black clergy have any credibility left when it comes to candidate endorsements?

"The credibility is based on the call that we have received from the Lord. We operate in a prophetic mode," said Rev. Albert Tyson. Tyson supports Mayor Emanuel.

An Emanuel campaign spokesman called the allegations that the campaign paid for African-Americans to support the mayor "an insult."