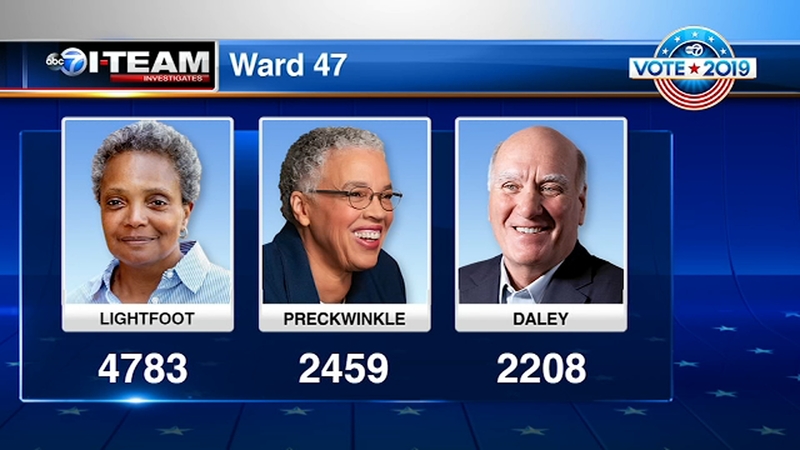 How Lightfoot, Preckwinkle managed to get out supporters

CHICAGO (WLS) -- The Chicago mayoral election saw low turnout - though not quite a record - as some voters chose to skip casting their ballot in Tuesday's races.

Nonetheless the two top candidates, Lori Lightfoot and Toni Preckwinkle, managed to get out their supporters.

The ABC7 I-Team zeroed in on two North Side wards - the 47th and 48th - which were carried by Rahm Emanuel in 2015. On Tuesday, these high and above-average voter turnout wards were won decisively by Lori Lightfoot.

In the 47th Ward, the latest numbers had Lightfoot with around 4,700 votes, Preckwinkle saw around half that and Daley trailed them both. Daley did even worse in the 48th Ward, where Lightfoot and Preckwinkle held steady.

The polls are open for Chicago's mayoral election Tuesday, but turnout so far has been low.

Chicago election officials said voters aged 55 to 64 are the largest group of voters. But voters ages 25 to 44, like 29-year-old Chris Fernandez, happen to be the largest voting block, and numbers showed they did not turn out well.

"I came out because my roommate reminded me: it's privilege to vote," Fernandez said.

"It makes me sad because I really do believe voting is a privilege, but I think there's just too many people in the field, too much confusion," said voter Gayle Novak.

Jim Allen, spokesman for the Chicago Board of Election, said that by late afternoon turnout was around 27 percent of registered voters.

The current record low for a municipal election was set back in 2007, when only 33 percent of the voters showed up.

"We have 14 candidates, it's hard to make up one's mind. I understand totally. We want to have clear winners. We don't want to have razor thin margins," said Chicago Board of Elections Chair Marisel Hernandez.