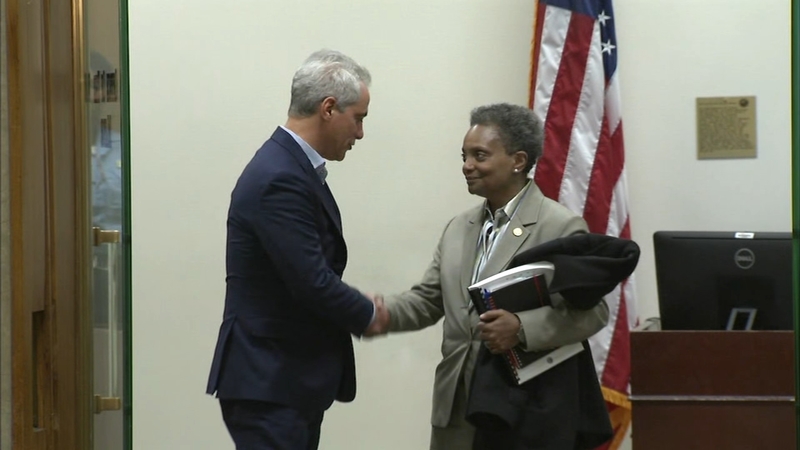 In a landslide, Lightfoot defeated Cook County Board President Toni Preckwinkle, winning in every one of Chicago's 50 wards Tuesday night. Lightfoot got about 75 percent of the vote compared to roughly 25 percent for Toni Preckwinkle.

Although Mayor Emanuel did not speak after their meeting, he did talk about the transition earlier in the day.

"I want to congratulate Lori for running a great campaign," said Emanuel, who started Wednesday at the Harold Washington Library. Afterwards, Emanuel briefly talked about Lightfoot's victory and the transition ahead.

"Everything that Lori wants, her team wants, there will be no bottleneck," Emanuel added. "We're going to make sure on day one she can hit the ground running and see her agenda that she ran on all the way through."

After meeting with Mayor Emanuel, Lightfoot went to the Chicago Police Department, where she met with police Supt. Eddie Johnson.

"I'm concerned about what the plans are for summer, and the other issue is what we need to know walking into office," Lightfoot said. "I'm sure we'll have a very detailed discussion."

Along with the transition, Mayor Emanuel said he planned to share a few thoughts with Lightfoot about being the city's mayor.

"This is one, if not the greatest jobs, in public life," he said. "It's a real treasure and honor to get the confidence of the public to do it. I'm going to tell her that in person."

Lightfoot won every ward in the city - an accomplishment Mayor Emanuel noted, adding that the elected officials, whether or not they were endorsed by him, should work with the new mayor.

"She won every ward, and I think people have an obligation to work with her," he said, "and help define, not only the agenda, but see it through."

Lightfoot said she was a bit surprised by her margin of victory, but she said she had a mandate for change.

"We ran hard, unequivocally on ending the corruption in city government on making a government that was far more responsive and transparent and accountable to the people and that's the kind of government we're gonna deliver," Lightfoot said.

Lightfoot thanked voters at a CTA station in the Loop Wednesday morning and spoke about her victory.

"I think what it signals is people across the city wanted a break from that broken political past, and I'm excited about the prospects. We ran hard, unequivocally on ending the corruption in city government, on making a government that was far more responsive and transparent and accountable to the people and that's the kind of government we're gonna deliver."

Fulfilling a pledge they signed a few days ago, both winner and loser made a joint appearance Wednesday morning at Rainbow PUSH, where they were joined by Reverend Jesse Jackson.

In a statement Wednesday morning, Rev. Jackson said, "Today, it's unity time. Now is the time to come together and go to work building bridges that bring us together and tearing down walls that keep us apart - walls between neighborhoods and people, walls between justice for some and opportunity for all."

Preckwinkle, a former alderman and teacher, noted that despite being rivals, they both shared concerns about schools and police-community relations and other issues.

"And I pledge to work with her on addressing all of those challenges," Preckwinkle said.

"Today is April 3rd, a new day for all of Chicago," Lightfoot said.

"I'm looking ahead to the hard work in the coming weeks and to collaborate with President Preckwinkle and other elected officials to bring the change that Chicagoans voted for and that we so desperately need," Lightfoot said.

Lightfoot said diversity is important to her, and her administration will reflect that.

Lightfoot will be sworn in on May 20, succeeding Mayor Emanuel, who opted not to run for a third term.