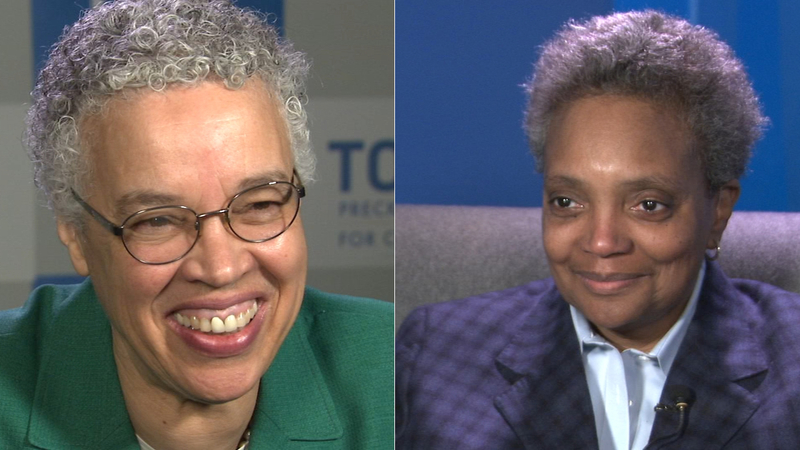 Hispanic vote up for grabs in Chicago mayoral election

CHICAGO (WLS) -- With the top two mayoral candidates Lori Lightfoot and Toni Preckwinkle only getting a combined 33 percent of the vote in the February 26 municipal election, the next four weeks will be spent trying to expand their support across the city. And one key group they will be targeting is Latinos.

With the two Hispanic candidates out of the race, there is a clear opportunity for Lightfoot and Preckwinkle to make their case to Latinos voters, presenting them with a real opportunity to flex their political muscle before the April 2 runoff.

"I see it as an opportunity for influence to make sure that we're at the table and making sure that the issues that we're concerned with are specifically part of the candidates' platform," said 36th Ward Alderman Gilbert Villegas, chairman, Latino Caucus.

Villegas plans to meet with Lightfoot and Preckwinkle later this week, but does not expect there to be an endorsement from the caucus, which is already split between the candidates.

"One of the things that I've been pushing in the City Council is jobs and contracts, making sure as the Latino community continues to grow, that there's some parity there," Villegas said.

But there is some concern in the Latino community that having two African American candidates on the ballot could generate a certain degree of apathy.

"My view is that from the point of view of the average Latino sitting in a neighborhood in Chicago, well, we're gonna elect a progressive black woman, I don't know that my vote's gonna really matter," said Sylvia Puente, executive director of the Latino Policy Forum.

Puente said because neither candidate has any significant ties to the Hispanic community, endorsements from Susana Mendoza or Gery Chico could be important.

Monday a group of Hispanic and black ministers were meeting with Dr. Willie Wilson as he seeks input on who to endorse. But as the Latino community not only grows in number but in political influence, they expect to have a voice in this election too.

"Here's my message to both Preckwinkle as well as to Lori Lightfoot, you need to sit with the Hispanic leadership community you need to allow yourself some time to just hear them out," said Shando Valdez, pastor of New Jerusalem Baptist Church