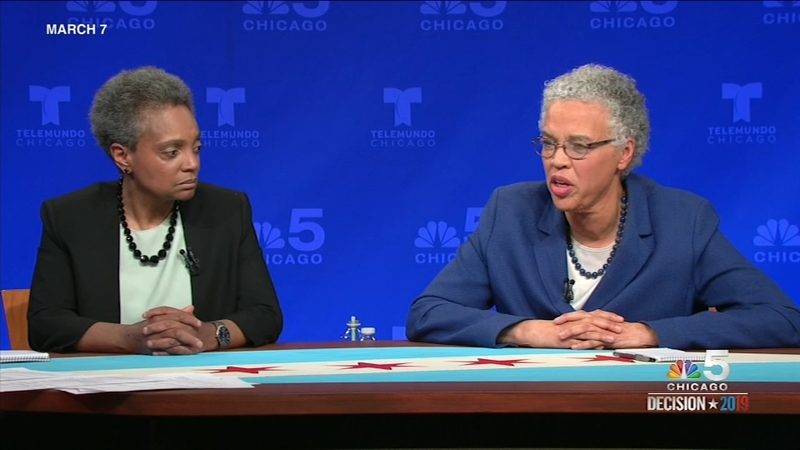 CHICAGO (WLS) -- Chicago's mayoral candidates spar over the relevance of Lori Lightfoot's sexual orientation being brought into a debate.

Was it genuine or political? Lightfoot questions the response Toni Preckwinkle gave to a question asked at last week's mayoral candidates first debate.

The question was to name one thing the candidates admired about each other. Lightfoot complimented Preckwinkle on overseeing Cook County's implementation of the Affordable Care Act.

Preckwinkle's answer about Lightfoot - "that she is open and honest about her LBGTQ orientation."

"Coming in the context of a clear strategy to be as negative against me as possible, I can only hope she wasn't blowing some type of dog whistle," Lightfoot said as she wonders whether the dog whistle was blown to conservative religious voters.

"That is ridiculous, I've always been a strong supporter of the LBGTQ community," Preckwinkle responded.

Lightfoot said even if Preckwinkle's intent was genuine, she and her campaign are sophisticated enough to know the statement had impact.

"We are never going to speak perfectly, but we are very intentional about the words that we use, how we say them and what the impact is on audiences," Lightfoot stated.

Preckwinkle insisted her answer was not scripted

"No, it was not a prepared answer, it occurred to me at the moment and it was clearly something I believed it strongly," Preckwinkle explained.