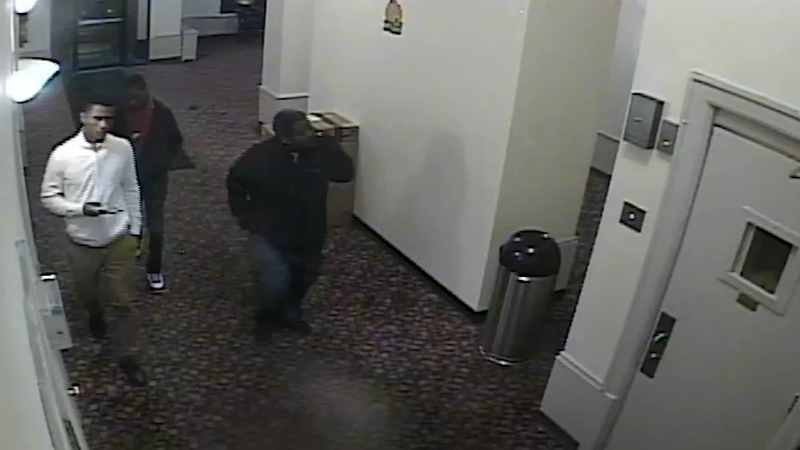 CHICAGO (WLS) -- Chicago police are asking for the public's help identifying two men and one woman suspected of breaking into a Lincoln Park apartment and handcuffing the woman inside at gunpoint.

Police said the 32-year-old woman was inside of her apartment Tuesday just after 9 p.m. in the 400-block of West Fullerton Parkway when someone knocked at her door.

The woman told police she didn't see anyone through the peephole, so she unlocked and opened the door to make sure someone was there. She said the three suspects ran inside, hit her over the head and then held her at gunpoint, police said.

The suspects allegedly handcuffed and put duct tape on the woman's mouth in her apartment, police said. She managed to escape to a neighbor's apartment to call 911.

The suspects went through the home and took whatever valuables they could get their hands on.

Police released images Wednesday of two men and one woman suspected of breaking into a Lincoln Park apartment and handcuffing the woman inside at gunpoint.

The second suspect is described as a black man, 21-28 years old with a thin build, brown eyes and black hair and was wearing a white shirt and light blue jeans.

The third suspect is described as a black woman, 26-28 years old, 5'6"-5'9", with hair shaved on the sides and braided on top, wearing a red scarf or hoodie with a black coat over it.

Residents at the Beach Walk apartment complex need a code or key to enter the complex. Without a code or key, they must be buzzed in.

There is no doorman, which some residents feel is needed. Tim Zaker, who lives in the complex, said signage on the building warns residents to be vigilant.

"I don't really need a doorman. I mean it's very secure," Zaker said. "It's just somebody let people in who don't live there. And that's an issue."

Lincoln Park resident Kim Cramer said violence is common in Chicago, and that is one reason why she's decided to move out of the city.

"I just don't feel safe walking to and from work and other places," Cramer said.

The TLC property management group released a statement, saying in part "We share the concern of the entire Lincoln Park Community and are deeply troubled by the incident that occurred at one of our properties. We are fully cooperating with the Chicago Police Department and are hopeful that the clear images provided by our camera system will aid the police department in their investigation."