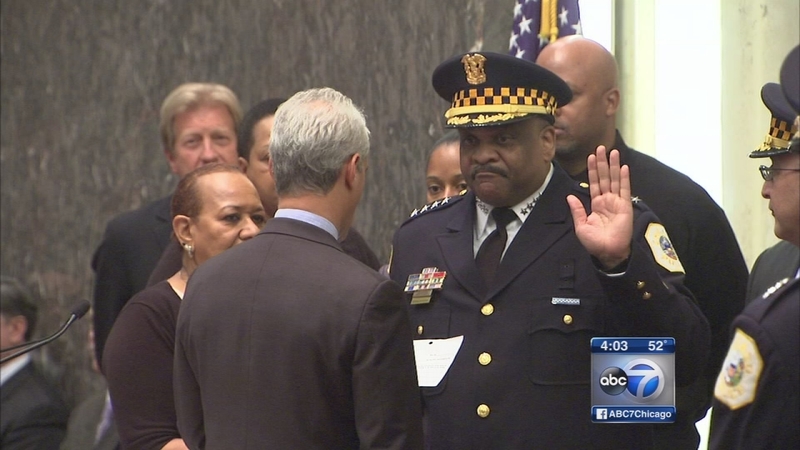 Aldermen approved Johnson, a 27-year veteran of the CPD who as a child lived in the Cabrini Green public housing project, saying he is the man who should lead the way to restoring that trust.

Johnson was hand-picked by Mayor Rahm Emanuel to lead the embattled police department. The CPD is under fire following a series of police involved shootings.

"You know I'm ready to hit the ground running because the crime won't wait," Johnson said. "So we have to get going, we have to get started. But it takes everybody to tackle this issue and I'm in it for the long haul."

Johnson repeated a promise made by his superintendent predecessors to get tough on abusive cops, a timely pledge as his confirmation came on the same day that Aldermen authorized spending $6.5 million to settle two separate police misconduct cases.

"Most of the police officers working in Chicago are professional and they treat people with respect. Those that want to engage in inappropriate conduct, then we'll handle them accordingly," Johnson said.

"He's really serious about rebuilding the trust factor between the police department and our communities," said Ald. Pat Dowell, Ward 3, of Johnson.

Johnson begins his first day as superintendent facing those issues head on. Hours after he was sworn in, a mayoral task force issued a report calling on the Chicago Police Department to "acknowledge its racist history."

At mid-afternoon, Johnson said he still had not read the accountability task force's report, but he said his goal is to root out racism and, when he leaves office, for the department to be in better shape than when he arrived.

Emanuel himself acknowledged racism in the U.S., Chicago and in CPD after Johnson was sworn in.

"The question is not whether we have racism, it's what are we doing about it," Emanuel said.

The Police Accountability Task Force spent several months listening to angry Chicagoans. The executive summary of its report said police have lost the trust of the public they serve. Many of those interviewed said they believe "CPD officers are racist, have no respect for the lives and experiences of people of color."