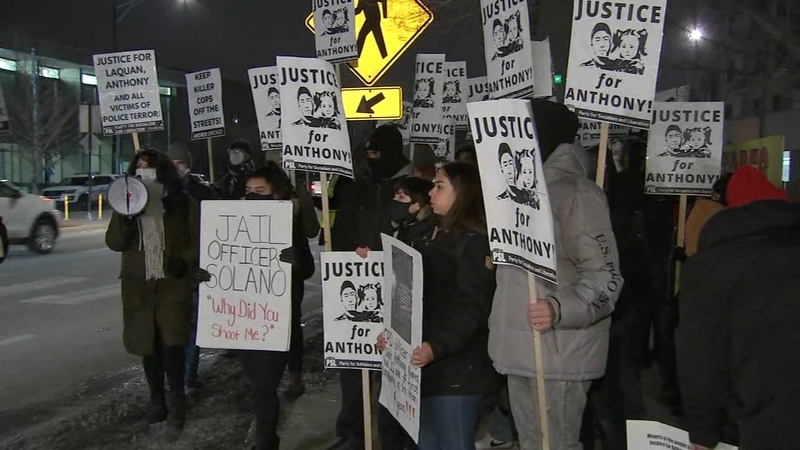 CHICAGO (WLS) -- A rally Monday night demanded justice for Anthony Alvarez, who was shot and killed by Chicago police last year in a confrontation captured on bodycam video.

Protesters gathered on what would have been Anthony Alvarez's 23rd birthday to call for the officer involved to be fired and arrested.

What happens next with that officer is up to Supt. David Brown and the police board after the Civilian Office of Police Accountability turned over the results of its investigation to CPD last month.

"Our gift to him today is to raise our voices and to remind them that we're not going to give up until we get justice," said Roxana Figueroa, Alvarez's cousin.

They gathered outside the 16th police district, where Officer Evan Solano is assigned, more than 10 months after Alvarez was shot and killed by Officer Solano during a foot chase that began at a gas station and ended on a Portage Park block.

One of the handful of shots fired by Solano hit Alvarez in the back. He later died at a hospital.

Bodycam video captured Alvarez asking "Why are you shooting me?" before Solano replies "You had a gun!"

Alvarez appeared to have a weapon in his right hand, which then fell to the ground. Following COPA's investigation, the case now in the hands of Superintendent David Brown, who can recommend to the police board what to do next with Solano.

"What justice looks like is Evan Solano getting fired and Evan Solano being charged with the murder of Anthony Alvarez," said Shabbir Manjee, with Party For Socialism and Liberation.

Solano is also being investigated for an incident two months after Alvarez's shooting in which he's seen on video drawing his weapon on another driver during an apparent dispute.

Weeks after that encounter, Solano was stripped of his police powers.