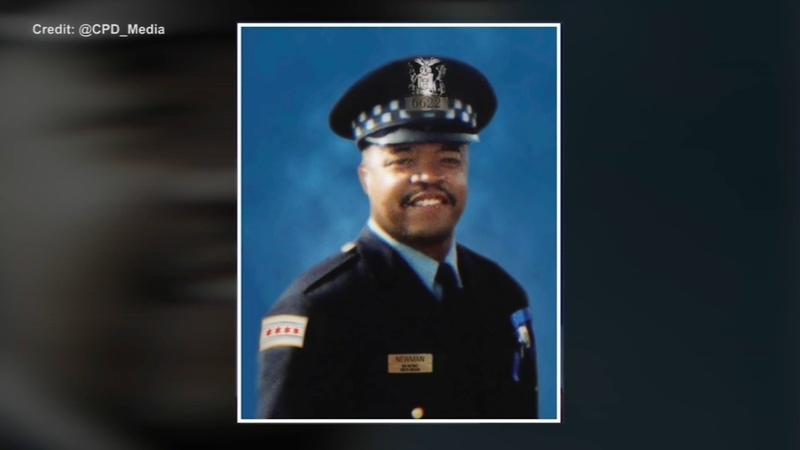 COUNTRY CLUB HILLS, Ill. (WLS) -- For the second time this week, the Chicago Police Department is saying goodbye to one of their own.

Family, friends and fellow CPD officers gathered Thursday for the funeral of Officer Ronald Newman, who died from COVID-19.

Newman's service took place in much the same way as those previous, behind closed doors, with only his immediate family able to be present. That service however was streamed by the department, allowing his friends and colleagues, to share in the moment.

Officer Newman last worked on March 22 and he was admitted to the hospital four days later, Brown said.

Newman was a 20-year veteran of the department, earning more than 130 departmental awards in his career. He spent the bulk of his career assigned to the 4th District.
Officer Newman is survived by his wife and two children.

"In the conversation I had with Officer Newman's widow, we both shared our faith and she expressed and I agreed, we really just hate this virus," said Superintendent Brown. "We know it's not in our nature to hate, but this virus has really taken on and taken precious life and it's so hurtful and we are so heartbroken by the effects of this virus on our first responders."

As of Thursday night, 384 members of the Chicago Police Department have tested positive for COVID-19.

Of the cases, 361 are officers and 19 are civilian employees, police said. Four members are reported positive, but awaiting medical confirmation.

"This is a scary situation," said Kevin Graham, of the Fraternal Order of Police. "It's not easy to fight something you can't see. These are the bravest men and women I know, who go out there every day. They're going to do their job."

Newman makes the third reported COVID-19 death in the department, with Officer Marco DiFranco and Sgt. Clifford Martin preceding him.