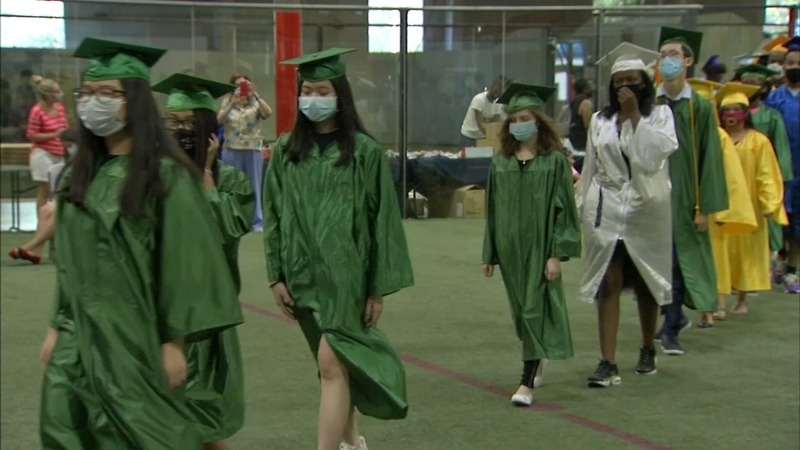 CHICAGO (WLS) -- Dozens of Chicago-area students who were unable to experience a traditional graduation because of the COVID-19 pandemic were celebrated for their accomplishments Friday.

Some 30 students from different schools, ranging from kindergarten to high school, walked across the stage Friday.


Tamon Taylor was one of them.
"My mom didn't graduate high school. Being able to do this for my mom and my family in general is something special to me," Taylor said.

The 18-year-old St. Ignatius grad is heading to the University of Wyoming to study computer science, and his mother couldn't be prouder.

"It's been amazing. I don't know any other way to say it," said Taylor's mother Toccara Kelly.

The 19-year-old electrical engineering prospect captured the nation's attention in 2015, when he attended President Barack Obama's State of the Union address. The Englewood resident was invited after he wrote a letter to Santa asking for the violence in his neighborhood to end.

"We are looked at like killers and violent and that is not the image I want to carry on," Bryant said.

The afternoon ceremony was hosted by the Chicago Police Department's 9th District CAPS Office for families with kids in their community policing program. Officer Sabrina King spearheaded the effort.

"Some of them have struggled and they're graduating late and some have done extremely well. They have full-ride scholarships, then we have a few students that have lost their parents to COVID-19," King said.

Organizers say it's part of their ongoing effort to build positive relationships with communities of color.


"The kids see us on a different level, see us acknowledging them. It's just neat to see," said Chicago Police Department Cmdr. Don Jerome.

Community activist Melissa Bansa said, "We just want to show them that we're here for you. We see what you are doing and we're going to be with you."

Students and their parents also got to accept a certificate on stage together.