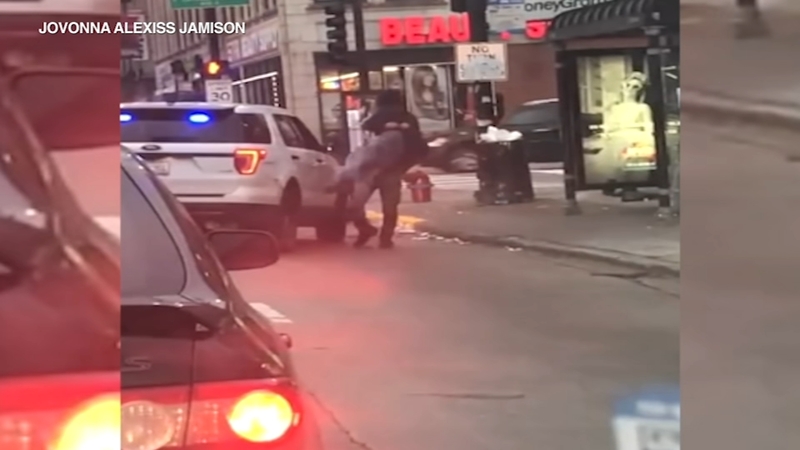 CHICAGO (WLS) -- A Chicago man who was hospitalized after being slammed to the ground by a police officer Thursday is facing an aggravated battery charge, according to police.

Bernard Kersh, 29, is charged with one count of aggravated battery of a peace officer. He's also facing misdemeanor charges for assault, resisting arrest and drinking alcohol in public.

Police said two officers approached Kersh, who was drinking alcohol at a bus stop in the Chatham neighborhood. Police said the man became verbally abusive, threatening them and spitting in an officer's face.

A cellphone video posted on social media captured the incident.

Keshia Johnson said she fell to her knees after watching the video of her son.

"I was nervous. I was scared. My heart dropped. I know I automatically thought the worst. He wasn't moving," Johnson said.

She said Kersh was on his way back to their home after picking up some alcoholic beverages for the family's Thanksgiving gathering.

"We were waiting to eat Thanksgiving dinner for him because he always blesses the table," Johnson said.

Johnson said she was on the phone with her son during the encounter with officers when the call suddenly ended.

"I was at a loss," she said. "I didn't know what happened to him.
Jovonna Jamison, who requested not to show her face on TV, recorded the incident.

"I was shocked. I was hysterical. I was worried. I was in fear that this gentleman wouldn't make it out alive," said Jamison.

The Civilian Office of Police Accountability is investigating the use of force.

A CPD spokesman said the officer involved will be relieved of police powers, pending the review.

The use of force investigation into this incident is now being handled exclusively by the Chicago Office of Police Accountabity. We are cooperating fully & they've asked for the officer involved to be relieved of police powers pending their review. CPD concurred. pic.twitter.com/xakuIk9Dkf

"While a single video does not depict the entirety of the interactions between the police and the individual, this particular video is very disturbing."

While a single video does not depict the entirety of the interactions between the police and the individual, this particular video is very disturbing.

COPA has commenced a full investigation into the use of force by Chicago Police Department officers near 79th & Cottage Grove (1/2).