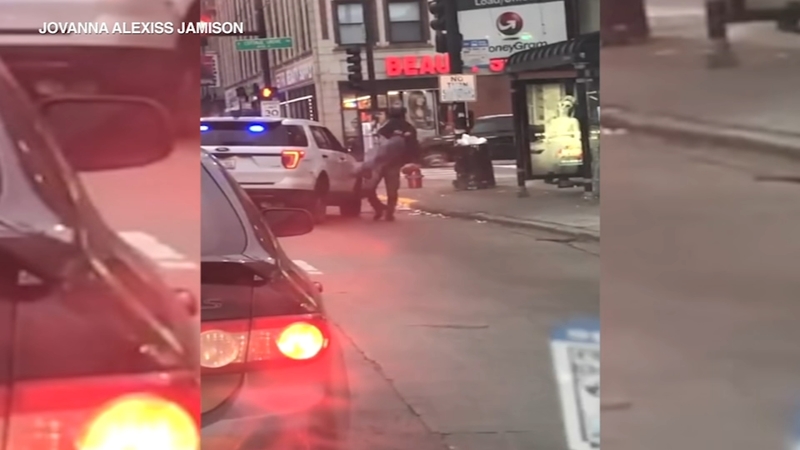 Rev. Jesse Jackson gets involved in case of man seen on video being body-slammed by Chicago officer

CHICAGO (WLS) -- Rev. Jesse Jackson is getting involved in the case of a Chicago man who was captured on video being slammed to the ground by a police officer on Thanksgiving Day.

Rev. Jackson tried to post bail on behalf of 29-year-old Bernard Kersh, who is facing an aggravated battery of a peace officer charge and several misdemeanor charges.

But Rev. Jackson and Kersh's mother left the Cook County Jail empty-handed Monday. Because of a possible parole violation, Kersh will likely remain behind bars for at least a few more days.

Rev. Jackson said he and the Rainbow PUSH Coalition posted the $500 bond after seeing the video of a Chicago police officer throwing Kersh to the ground during an arrest.

"His body slammed to the ground was so provocative, it shook the nation," Rev. Jackson said.

According to the arrest report, the officer struggled with Kersh before the incident. The officer attempted to place Kersh into custody by attempting to apply a wrist lock, but then Kersh allegedly licked the officer's face and spit on him.

The officer has been relieved of his police powers while investigators review the case.

Rev. Jackson said the use of an "emergency takedown" was unacceptable.

"This young man's skull could have been cracked," Rev. Jackson said. "They said he licked the face of the officer then spit in his face. It is clear he is mentally ill. He needs help, not to be body-slammed."

According to data from CPD, he was charged with aggravated battery of a police officer back in June 2018.