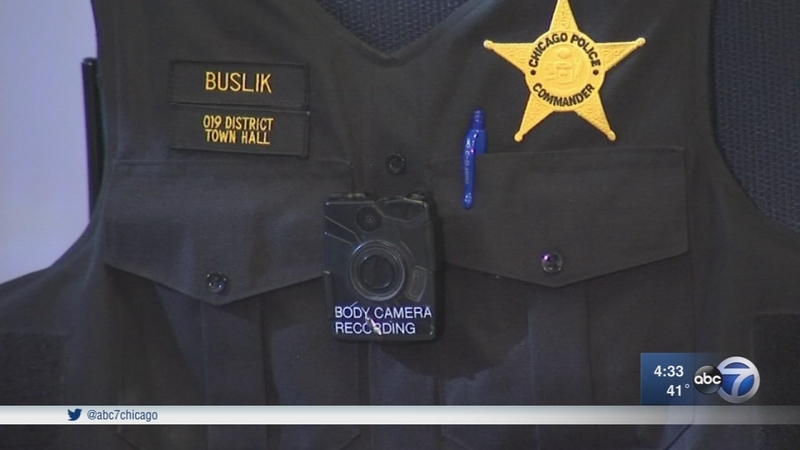 CHICAGO (WLS) -- Every Chicago police officer will be wearing a camera much sooner than expected. The city announced Wednesday it will fast-track the program in hopes of improving community relations and police accountability.

Mayor Rahm Emanuel said all officers will be wearing body cameras a year ahead of schedule.

The Chicago Police Department body camera pilot program, which began in January 2015, still requires that the officer actually turn the camera on. It records 72 hours of HD video and includes, with technology upgrades, a 32-second video buffer. That protects the privacy of community members and gives police a bit of discretion. After that buffer, it begins to record audio as well.

Since the program started, officers have taken more than 300,000 segments of footage. The city released overnight a sample video showing what the camera looks like while an officer is wearing it.

By the end of 2017, officers in all 22 police districts will be wearing them - a full year earlier than originally planned. The city said the expedited expansion supports the safety and security to officers while improving transparency.

"This expedited expansion will support officers working on the street to reduce crime in our neighborhoods, improve transparency, and rebuild trust within the communities that are police officers serve," said CPD Commander Marc Buslik, 19th District.

"Created a city of savages. If you don't listen to people who can get to the root cause of this problem, then by summertime you're going to have a problem bigger than these body cams, you know? It's the starvation of the people, you know? Deal with the root cause," said Mark Carter, a Chicagoan.

The program continues to roll out as the U.S. Department of Justice continues an investigation into the CPD's training and procedures that were initiated during the public outcry after the release of the Laquan McDonald video.

Karonisha Ramsey, the mother of 19-year-old Kajuan Raye, who was shot and killed by a Chicago police sergeant on the city's South Side the day before Thanksgiving, said she might know more about what happened if the officer had been wearing a body camera.

"Sometimes when you know somebody's watching you don't do certain things," said Katina Anderson, a family friend. "Maybe he would have thought twice."

Ramsey filed a federal lawsuit against the officer involved, and said she believed her son's police involved shooting is one of the reasons why the department decided to fast track its body cam program.

The expedited process is slated to begin next month.