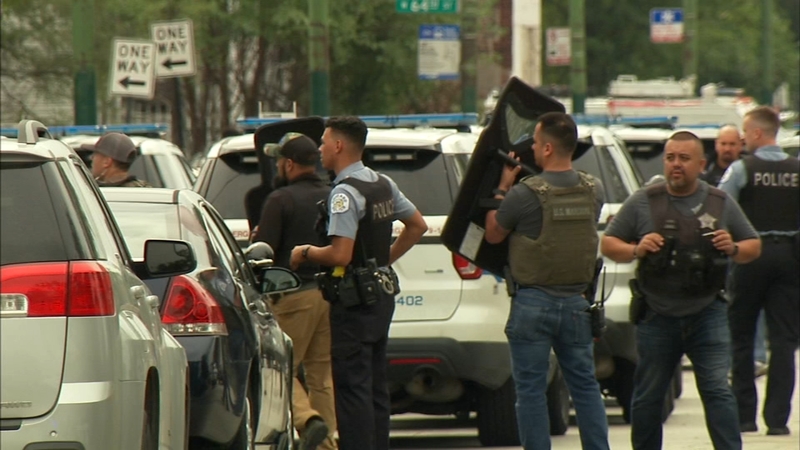 CHICAGO (WLS) -- It's been a difficult and dangerous week for the Chicago Police Department, which has been dealt much violence and loss.

A veteran officer with the department's fugitive apprehension unit was shot and critically wounded in West Englewood early Saturday morning. The officer was serving a warrant to take into custody a suspect accused of shooting a woman while riding a bike in the Fulton River District earlier this week.

"Having been involved in some shootings, that's a difficult thing," said Chicago Police Supt. Eddie Johnson. "Those decisions those officers make out there in a split second can change someone's life."

Hours earlier, two other Chicago police officers were injured after being dragged by a fleeing vehicle outside a White Castle near the city's Bronzeville neighborhood.

RELATED: 2 CPD officers injured after being dragged by vehicle on South Side

It happened as the cops responded to a call of a man with a gun inside the restaurant, located at 35th and King Drive.

While the male officer sustained minor injuries, his female partner was hospitalized in serious condition with two collapsed lungs and fractured ribs.

"We are reminded of the sacrifice our officers make every day to protect the residents in the city that we love," said Chicago Mayor Lori Lightfoot.

On Tuesday, many in the Chicago Police Department were left reeling after learning of the unexpected loss of 40-year-old officer Paul Escamilla.

The highly decorated lawman was found dead of an apparent suicide at a forest preserve on Chicago's Northwest Side. It's the fourth suicide by a Chicago police officer this year.

The department had five last year as nationwide police suicides are on the rise.

A 61-year-old retired police officer was discovered with a gunshot wound to the head Saturday night, the department confirmed. He was pronounced near the 8300 block of S. Wabash.