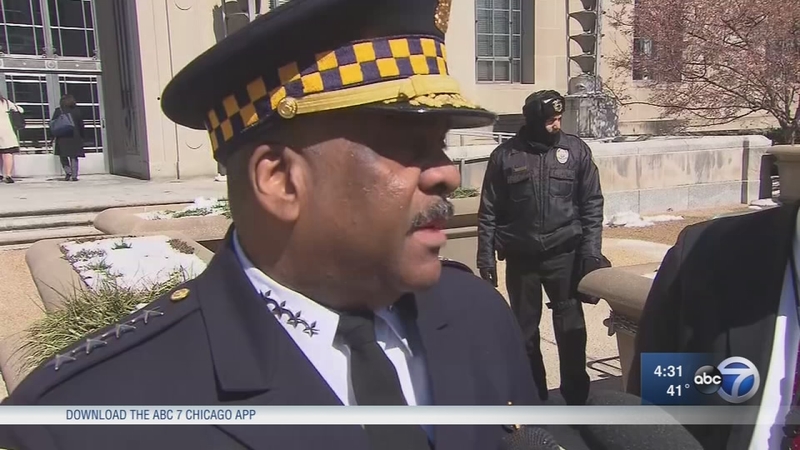 WASHINGTON (WLS) -- Chicago Police Superintendent Eddie Johnson met with the chief law enforcement officer in the United States, Attorney General Jeff Sessions, on Thursday. It came at a crucial time for the Chicago Police Department and for the city.

Johnson, Sessions and several police chiefs from around the nation, discussed how the federal government can help target violence in urban areas.

"We talked about things specifically related to Chicago, and I think that we both want to be flexible, and we both understand, and you know, like CPD, we need to reform, and we agreed to work collaboratively to reform CPD," Johnson said.

The mayor's spokeswoman said the issue of whether or not the Department of Justice will oversee reforms at the Chicago Police Department did not come up during the meeting. She said that wasn't the point of the meeting anyway because

Although Sessions made a brief comment at the meeting, he didn't address the issue of a consent decree, either. He did say the feds want to help police departments like Chicago.

"We can work with them to reduce victimization, reduce the number of lives lost, people injured and people addicted," Sessions said.

Johnson did arrive on Capitol Hill with a wish list for Sessions, or items that Chicago is asking for.

Police said in a release Thursday that Johnson planned to ask for more federal prosecutors in Chicago to focus on the prosecution of illegal gun cases and more ATF, DEA and FBI agents in Chicago to create additional CPD task forces to cut down on gang and gun crimes.

Johnson also asked for the ATF to set up a National Integrated Ballistic Information Network lab in Chicago, to faster process evidence from shootings and trace guns and in turn, build stronger gun cases, the CPD said.

On Thursday, community activists like William Calloway, who was partially responsible for the release of the Laquan McDonald video, wanted a consent decree for the city-federal oversight.

"We're demanding that Attorney General, Jeff Sessions gives us the consent decree that we really need in the city of Chicago," he said.

A spokeswoman for the mayor said they are absolutely still certain that a consent decree is necessary and they support it.

ABC 7 has asked the Department of Justice for a statement about the meeting and the consent decree. ABC 7 has not heard back from the department.

The U.S. Department of Justice recently released a report that said the CPD has a pattern and practice of excessive force and needs a federal monitor to oversee change.

Sessions has said in the past he does not support monitors overseeing the nation's police departments, saying it creates an anti-police environment and makes officers afraid to do their jobs.'

A spokesman for the Chicago Police Department said Sessions agreed to nearly all the items of the city's list and now they're working on the next step.