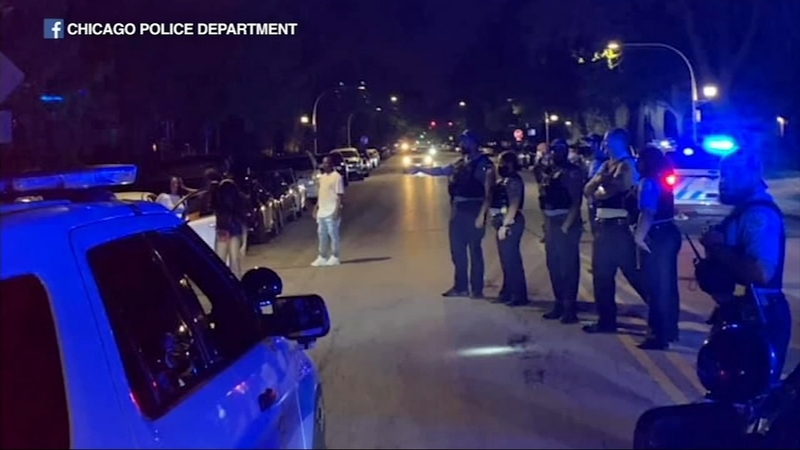 CHICAGO (WLS) -- Chicago's new police chief responded to criticism of how his officers broke up the large crowd in one Chicago neighborhood over the holiday weekend.

Chicago police are expected to address the enforcement of the city's stay at home order over the holiday weekend Tuesday with some saying their efforts were unfair.

On Tuesday morning, Brown said people have been cooped up because of the coronavirus outbreak and are restless.

"This unacceptable level of violence happened while Chicago remains under the stay at home order meant to prevent the spread of COVID-19," Brown said.

Brown had announced an all hands on deck strategy with beefed up police patrols, but on Tuesday Mayor Lori Lightfoot made it clear more needs to be done.

"I know that there was a lot of energy and coordination among a variety of groups. What I said to the superintendent this morning is, this was a fail," Lightfoot said. "And whatever the strategy is, it didn't work."

Meanwhile, CPD is under fire after an Instagram video surfaced showing officers breaking up a large crowd Sunday night in Englewood.

Chicago police said they were trying to disperse the crowd when an officer noticed a man holding a gun and then there was a chase. The man was taken into custody a short time later.

Shots were fired in the area and a second person was taken into custody, police said.

No one was injured by gunfire but two officers were injured and transported to the hospital in good condition, police said.

The incident caught the attention of Lightfoot, who wrote on Twitter, "We will continue to investigate the incident to ensure proper tactics were used - ensuring constitutional rights are protected and that CPD officers are wearing face coverings."

I have seen a widely shared video of an incident in the 007th District. We will continue to investigate the incident to ensure proper tactics were used—ensuring constitutional rights are protected—and that CPD officers are wearing face coverings to maintain public health.

It also caught the attention of Chance the Rapper, who tweeted, "Please stop sending large groups of militarized police into our neighborhoods exclusively."

Lightfoot disputed that narrative in her own tweets, saying police "responded to dozens of reports of social distancing violations in every part of Chicago."

Yo I seen HUNDREDS of ppl at millennium park and and pics of even more at the parks on the north side. Outside, no masks, no social distancing, enjoying themselves. Please stop sending large groups of militarized police into our neighborhoods exclusively https://t.co/mnAUSCsevy

Chicago Police Superintendent David Brown speaks after a violent Memorial Day weekend which also saw officers get into a scuffle while dispersing a group in Englewood.

"I want the community to understand the challenges officers face when saving lives and tamping down violence crime," Brown said.

Lightfoot followed up to her tweets over the weekend that officers were only breaking up crowds in communities of color, adding that they were sent all over the city.

"This is probably one of the most difficult times of policing that we've experience in the city that goes back 20 plus years," Lightfoot said.

Monday, protesters in Millennium Park were dispersed by police after gathering too closely as well.