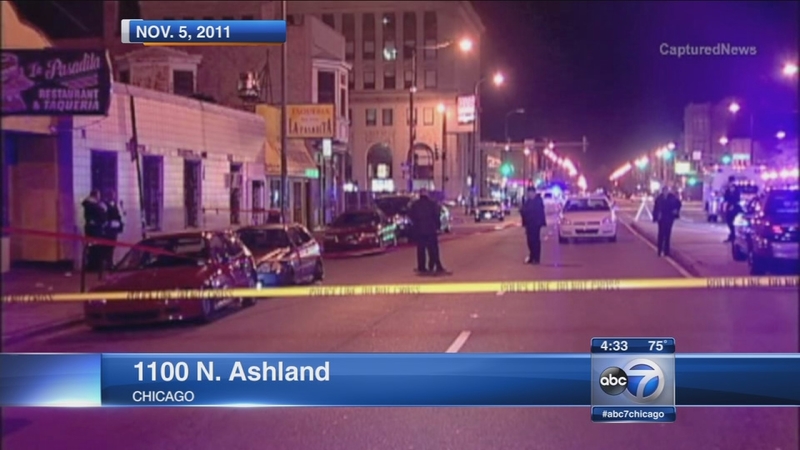 CHICAGO (WLS) -- For the first time, the agency that reviews shootings involving Chicago police officers recommends that one of them should be fired.

The recommendation stems from a shooting that took place on November 5, 2011 at 3:30 a.m. in the 1100-block of Ashland Avenue. The La Pasadita restaurant was closing, and some teenagers were standing out front when the driver of a passing car shot at them.

One young man was killed and two were wounded. Off-duty police officer Frank Perez, who was working security at the restaurants, turned to see the muzzle flashes. He drew his sidearm and started shooting. The entire incident was captured by a security camera just outside the restaurant.

The video, which has not been made public, shows off-duty officer Perez firing a number of shots into the wrong car. One of the rounds strikes the driver of that car in the back.

That person, an innocent bystander, survived with a bullet wound that was close to his heart. The killer got away, but was subsequently caught months later.

Officer Perez fired 16 shots. He insisted that he directed fire at the correct fleeing car, but investigators say the video shows otherwise. Perez was accused of being "inattentive to duty" because he didn't identify the appropriate target, and "providing false information" because he stuck to his story even after being shown the video that contradicts his account.

After a lengthy investigation, the Independent Police Review Authority concluded that the charges against Perez are sustained, and that he should be fired.

"That's just an injustice that whoever is wanting to fire him is doing the wrong thing," says David Espinoza, owner of La Pasadita. "He probably saved somebody from getting shot by shooting at the car.

Espinoza says he thinks Officer Perez is getting a raw deal.

But IPRA concludes quite the opposite: that Perez unloading his clip at and into the wrong car warrants his firing. The next step in the process is up to the Police Superintendent who could agree with the recommendation or reject it, in which case is goes to the police board.

The bystander who was mistakenly shot by Officer Perez did not sue the city.

IPRA, over its eight years of existence, has investigated dozens and dozens of officer involved shooting cases. This is the first time it's recommended that an officer be fired.