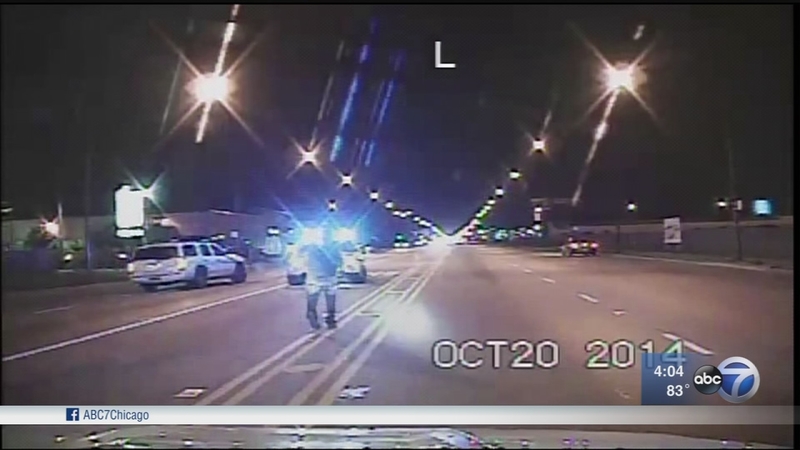 CHICAGO (WLS) -- A Chicago police officer and two former officers pleaded not guilty Monday to conspiring to cover up what happened the night a white officer killed a black teenager by shooting him 16 times.

The indictment alleges the trio quickly coordinated their stories to protect officers and lied when they said Laquan aggressively swung a knife and tried to get up, while still armed, after he was shot.

But police dashcam video showed the teen was walking away from officers with a small knife by his side when he was shot by Officer Jason Van Dyke, who has pleaded not guilty to first-degree murder. The video - which wasn't publicly released until a year after the shooting - also showed that Laquan was spun to the ground as Van Dyke repeatedly shot him in quick succession.

"We've seen since the DOJ report time and time again that officers protect each other. This is the blue code. This is a practice of pattern. This is something we are trying to challenge because we don't have transparency," said Kofi Ademola, Black Lives Matter.

The arraignment was first assigned to Judge Mary Brosnahan, who for unknown reasons recused herself, sending the case to Judge Diane Cannon.

Judge Cannon issued each officer a $50,000 bond, provided they let the courts know if they move or travel.

"This is the flip of the coin," said Walsh's lawyer Tom Breen. "He has been on the other side so often, and he's worked the streets and protected the public. He's made arrests, he has participated in convictions, and today he finds himself on the other side of that."

The prosecution and attorneys for March and Gaffney declined to comment.

Community leaders gathered after the arraignment to voice their concerns over police accountability.

"People want to feel clearly that they can trust the local office, and until this kind of thing get cleared, we won't have this form of peace between our community and our civic order," said Bishop Simon Gordon, Triedstone Baptist Church.
EMBED More News Videos

"It don't just stop with these three officers and Van Dyke," said activist William Calloway. "It's other officers who lied on the police report, this man covered up this tape. Other people need to be held accountable and that's not enough for us."

"I think without a doubt that Rahm Emanuel intentionally concealed this Laquan McDonald video," he said. "He concealed purposefully to be reelected and we want the grand jury to expand their investigation to Rahm Emanuel."

"The Mayor and Superintendent Johnson each have made clear there is zero tolerance for anyone not conducting themselves to the highest professional standard..."

"Until people, particularly police officers that do wrong, are held accountable and arrested and put in jail, until that happens there will be no trust," said Father Michael Pfleger, Saint Sabina Church.

"We've got to break the code of silence and have accountability to make sure that anyone who breaks the law and any participants that make it secret that they are held accountable and this action changes," said Melinda Kelly, Chatham Business Association.

Walsh, March and Gaffney were freed on their own recognizance during Monday's arraignment hearing, which marked their first court appearance in the case, and ordered they be finger printed. If convicted, the men could face a five-year prison sentence for the official misconduct charge alone.

In a statement released with the indictment, the special prosecutor appointment to the case, Patricia Brown Holmes, said the officers and others "coordinated their activities to protect each other and other members of the Chicago Police Department." She said the officers went so far as to ignore contrary evidence and failed to try to interview key witnesses.
March - who as a detective concluded the shooting was justified - and Walsh have left the department. Gaffney is still on the force but, per department policy, was suspended because of the felony indictment.

The indictment wasn't a surprise, given a special prosecutor was appointed last year to investigate and the city's police superintendent announced he was pushing to have seven officers fired for what they wrote in their reports.

Still, such charges are rare against law enforcement officers, and the indictment was especially jarring because it revealed a concerted effort to create a narrative to protect Van Dyke.