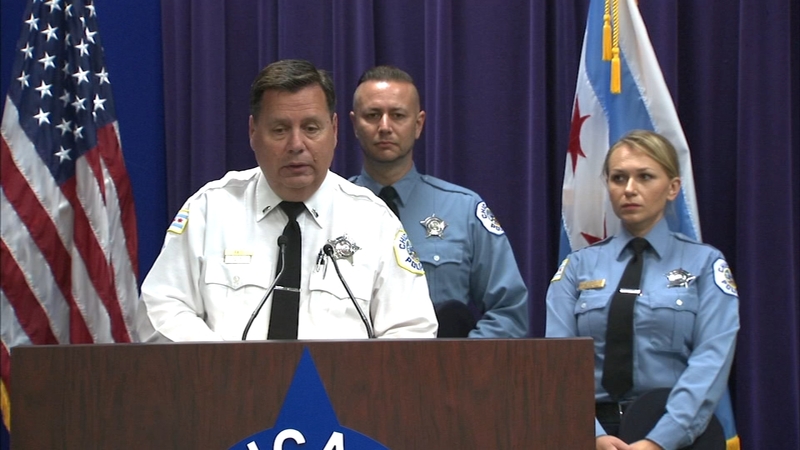 CHICAGO (WLS) -- Chicago Police Lt. Antonio Baio was driving to work in his police car Monday morning when he noticed something was wrong on the Nagle Avenue overpass above the Kennedy Expressway in the Jefferson Park neighborhood. Traffic was blocked, so he got out of his car to investigate and saw a man.

"I asked him, 'Hey sir, I need to talk to you. What's going here? Please, let me know what's going on,'" Baio said. "At that point, the gentleman told me, he goes: 'This isn't going to end well. This is going to be a suicide by cop situation.'"

Baio, who has completed crisis intervention training, said he didn't expect to hear that answer, but his training kicked in.

"That caught me off guard. It didn't look like he was in distress at that moment," Baio said, replying to the man, "You need to tell me what's going on."

The lieutenant knew something was wrong in the area because traffic was blocked. It was Monday morning, 8 a.m.

Just minutes before, two off-duty officers from the 16th District - Officers Robert Roth and Agnieszka Broenic - had just finished their nightshift and were headed to court. They happened to see the same man, but he was on the street, right in front of a bus.

"We saw him lying in front of the bus - to us, we perceived he got hit by the bus," said Officer Roth.

His partner had the same impression. "We thought it was an accident," she said.

It wasn't an accident. Instead, the man bounced up and ran to the fence, and that's when they saw the lieutenant struggling to pull the man down.

"He started to climb it and said, 'I can't take this anymore. It's gotta end!' At that point, he started to climb over the fence," the lieutenant said. "I was reaching up this high to grab him by the waist and start bringing him down. He was still pulling himself up. Officer Roth here, came out of nowhere, like Spider Man."

At that critical moment, just as the man was about to make it over the fence, Roth grabbed his arm.

"I ran over there, kind of scaled the fence and I was able to get a hold of one of his arms," Roth said.

All of them fell onto Nagle Avenue. The officers were relieved they saved a distraught man who needed help.

"He was taken to the hospital for treatment and he was receiving the care needed to help him get back and get healthy," Baio said.

A life saved, thanks to Chicago Police.