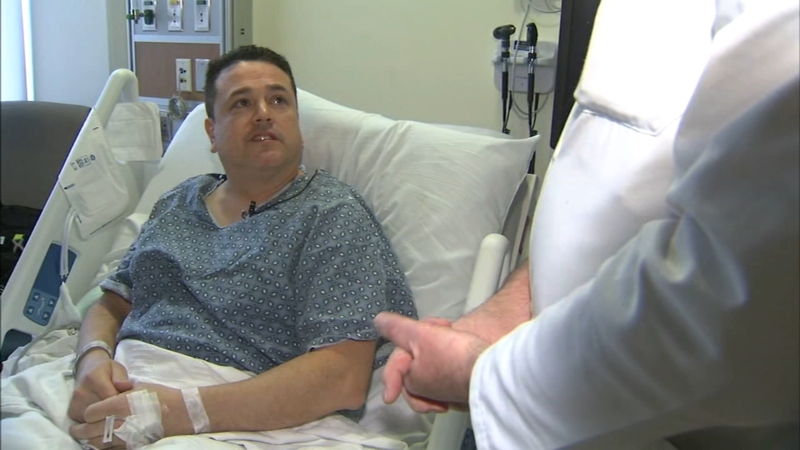 CHICAGO (WLS) -- A Chicago police officer is helping save the life of a person he's never met.

He's recovering in the hospital Wednesday night after donating bone marrow to someone in Italy.

Officer Joe Deleon spends his career working to serve and protect, but rarely does he get to say he saved a life. Yet as he recovers from surgery to extract bone marrow this Wednesday morning, Deleon said he's hoping that's exactly what he is doing.

"I guess they exhausted every option for him before they called me to see if I could donate Marrow," Deleon said.

Deleon registered to be a donor more than 12 years ago with Be the Match, an organization that connects donors with those in need of blood or an organ.

"In a lot of cases we're saving people's lives and that's a huge deal for our donors," Be the Match representative, Sarah Hennen said.

Deleon's doctors at Loyola Medical center said the surgery to extract the bone marrow took about an hour and a half, but provides a new hope for life to the recipient. In this case Deleon signed up more than a decade ago and finally got the call that he was a match last year.

"We go literally from a 0 to 60 percent chance of cure. So it's a big deal," said Dr. Patrick Stiff at Loyola Medical Center.

Moments after getting Deleon's bone marrow, a courier hurried to the airport and boarded a plane for Italy where he will go straight to the hospital where the patient, a 62-year-old man with Leukemia is waiting.

That's all Deleon knows about the patient.

"It's strange you don't know much about him or his family. I just hope it works out for him," Deleon stated.