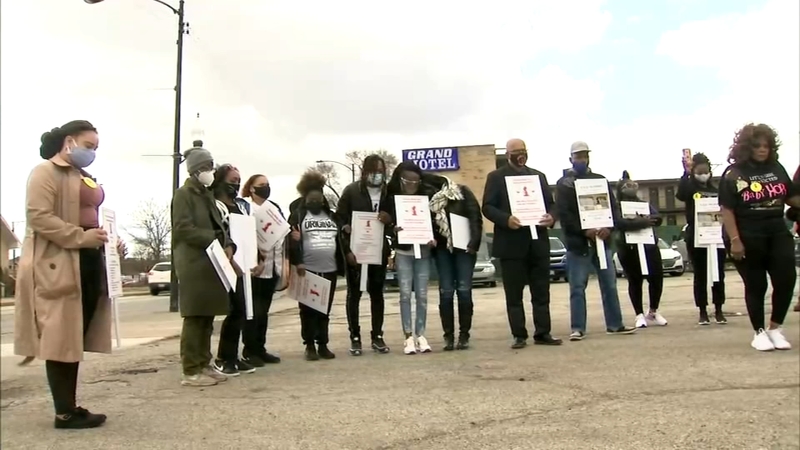 CHICAGO (WLS) -- Governor JB Pritzker's office is not happy about the handling of an alleged child sex trafficking case in Chicago.

The governor's office released a statement saying he is "outraged law enforcement failed to fully investigate allegations..." and "far too often these crimes are perpetuated under the radar, but in this instance, police had information they failed to act on appropriately."

Officers are accused of not investigating a case involving a 10-year-old girl in October 2020. Now, several community groups are calling for police accountability.

Those gathered say they wish they were doing anything else but this.

"Her life will never be the same," said Dr. LaShawn Littrice, Black Lives Matter/Women of Faith. "She can't get her innocence back, but we can assist her in this mental health crisis."

Several organizations united after an alleged sexual assault of a minor at a Roseland motel and what they said was a lack of response by CPD.

"This should never, ever happen again to a child in Chicago - whether you are Black, white, Hispanic. We must stand up as champions for young children," said Tio Hardiman, Violence Interrupters.

"Five decades ago, it happened to me," said Brenda Myers-Powell, The Dreamcatcher Foundation. "And I can't believe the same situations and procedures are happening today."

Chicago Police said Wednesday they are investigating internally how the girl's case was handled and that the criminal investigation of a sexual assualt of a minor from October at the motel is ongoing.

The girl, now 11, is temporarily in the care of DCFS and that she was the subject of 13 reports to DCFS. The first was when she was 6 for neglect, and the other 12 reports about concerns she was a victim of sex trafficking.

While one man was charged regarding this girl, sources tell us there are at least four other men connected to this girl's case.

"Chicago Police over three years - starting when this girl was 7 and continuing until she was 10 years old - over three years, the Chicago Police received at least a dozen reports that she was being trafficked and sexually abused, and they really did nothing at all, either," Cook County Public Guardian Charles Golbert said.