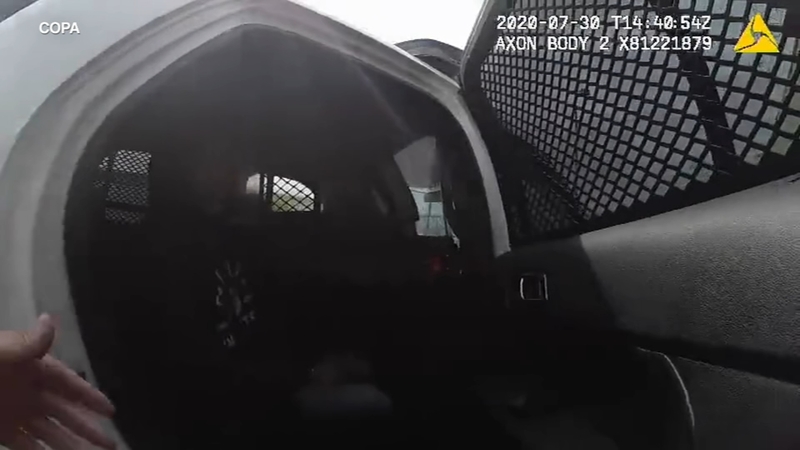 CHICAGO -- Chicago's police oversight agency has released video footage of a man opening fire from the back seat of a squad car, striking two officers and injuring another outside a West Side station in the summer of 2020.
The footage shows an officer opening the door of the car, coming face to face with Lovelle Jordan as he begins shooting. A shootout ensures for nearly two minutes, with officers firing back, striking Jordan and leaving him paralyzed.


Jordan, 27, was sentenced to 31 years in prison this April after pleading guilty to attempted murder and aggravated battery against a police officer.
RELATED: Charges filed in CPD shooting at 25th District station; 1 officer remains hospitalized, 2 others released

Footage released Wednesday from July 30, 2020, shows officers pulling Jordan from the front seat of a stolen 2018 Porsche and throwing him to the ground.
Officers cuff Jordan and tell him they are searching him for weapons. Jordan responds that he does not have any weapons on him.

Jordan asks officers to place his handcuffs in the front because he had third-degree burns on his hands. Officers refuse but tell him they will remove the handcuffs once they are at the station.

While in the SUV, Jordan was able to move his hands to the front and pulled the gun from his clothes, police said.


When they arrive at the Grand Central District police station, 5555 W. Grand Ave., footage from a body-worn camera shows an officer opening the car door for Jordan who then pulls out a gun and begins shooting.

The officer falls to the ground then rises about two minutes later and fires about two shots before running into the station.
Four officers fired shots at Jordan, who eventually fell to the ground, left paralyzed by a gunshot wound.

Jordan had fired at least five shots, striking an officer in the shoulder and neck, prosecutors said. Two other officers suffered less serious wounds: One was shot in his protective vest, but the bullet didn't penetrate; the other officer was wounded in the hip.

COPA concluded its investigation into the officer-involved shooting on March 31. The superintendent has 60 days to review the agency's findings and recommendations.