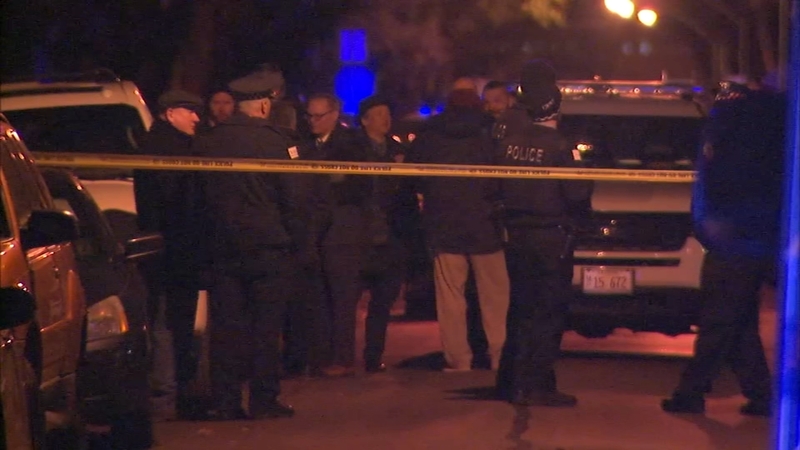 CHICAGO (WLS) -- An off-duty Chicago police officer fatally shot a teenage boy who police said was trying to rob him on the Northwest Side Thursday morning. Police said a second suspect is in custody.

The incident occurred in the 5800-block of North Talman Avenue at about 2:23 a.m., police said. The officer was in his car when police said two teens, ages 16 and 17 years old, walked up, pulled out a gun and demanded he hand over his wallet.

The officer complied, but one of the teens reached back into the car and that's when police said the teen found the officer's badge. There was a struggle and shots were fired.

"They see the police star, the offender with a weapon points the weapon at our officer and tells him not to move," said Chicago Police Deputy Chief Al Nagode. "The officer, knowing that he is armed, is forced to pull out his weapon and he fires at the individual armed with a gun, striking that individual."

The teen who was shot was transported to a local hospital, where he was pronounced dead. Authorities have not yet released his identity.

The officer was not hurt in the incident and has been placed on leave pending an investigation.

The 17-year-old has been charged with one felony count of armed robbery with a firearm. He was also charged with two misdemeanor counts of theft of property under $500 unrelated to the incident Thursday.

Wednesday, the 16-year-old who was shot and killed was reported missing. Investigators said the boy's father called 9-1-1 after he noticed his son stole his gun.

Police believe that was the gun he used during the armed robbery.

"The weapon that was described is consistent with the weapon we recovered on scene," Nagode said.

Police said the second teen ran off and was later found by a police officer and taken into custody.

A weapon was recovered on the scene, police said.

The mother of the teen who was killed said she wants answers about what happened to her son. She asked not to be identified.

The Civilian Office of Police Accountability is investigating the shooting. The officer involved will be placed on routine administrative duties for 30 days.

Gary Lehman and his family woke up around 3 a.m. to the sound of gunfire

"My wife heard two (gunshots) and then woke me up and then right after that there was one more," he said.

A neighbor who did not want to be identified said her husband heard the cop yelling for help and then quickly dialed 911.

"He thought he heard a shot and then a man yelling 'Somebody call 9-1-1' repeatedly," she said.

COPA said in a statement, "As a part of our investigation COPA will work in concert with the Cook County States Attorney Office Office (CCSAO), speak to any witnesses of today's incident as well as review available video. We encourage anyone with information to contact us at 312-746-3609 or chicagocopa.org.