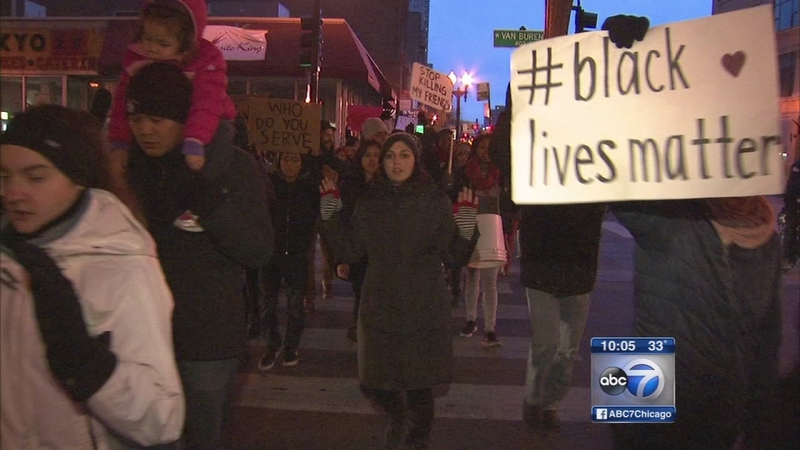 CHICAGO (WLS) -- Chicago police said 11 protesters were arrested after protests across Chicago continued Sunday over grand jury decisions last week not to indict police officers in the deaths of Eric Garner in New York and Michael Brown in Ferguson, Missouri.

All 11 individuals arrested were charged with obstruction of traffic, a misdemeanor.

Hundreds once again took to the streets of the Loop Sunday evening to protest what they say is a systemic problem of police brutality and profiling of young African American men in this country.

"The lives of young African American men are being taken and I feel like if we don't be out here America will continue to think that's ok and acceptable," said Elijah Obasanya.

The group of largely young people took off from State and Jackson, making their way to Chicago Police headquarters at 35th and Michigan. While the protest remained peaceful, there was some tension when at one point police arrested a handful of people. Most of those out on the streets Sunday night insist they are not going anywhere.

The protests culminated a day of marches which began Sunday morning at churches all around the city. Parishioners expressed their discontent at a New York grand jury's decision not to indict a white police officer in the choking death of Garner, an unarmed black man stopped for allegedly selling loose cigarettes last July. The entire incident was caught on videotape.

"It's hurtful when you come out your house and they instantly profile you, want to do something just because of who you are, the skin you wear," said church member Gerald Lamar Wilson.

Father Michael Pfleger led a group from Saint Sabina Church, 1210 W 78th Place, where they blocked the intersection of 79th and Racine for 11 minutes, representing the 11 times Garner yelled that could not breathe. Many laid down in the street for a moment of silence. 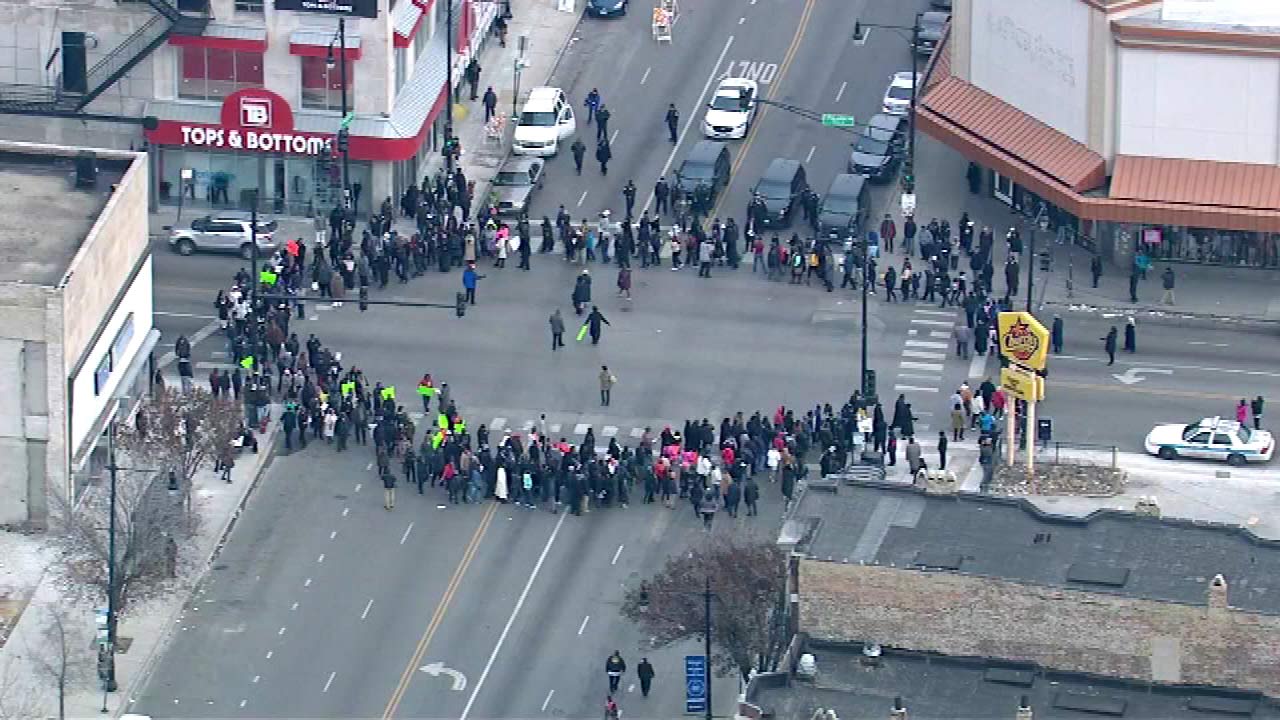 "Interrupt traffic as a symbol that we want to interrupt the injustice, the racism, the racial profiling, and the broken justice system in America," said Father Pfleger, who called on all pastors in Chicago to take their churches outside in peaceful protests throughout the day.

"We're standing up as churches," he said. "It's time for the churches, synagogues and mosques to stand up, to be the voice of conscious, to come together and unify, and say that we're standing against the injustice going on around this country. We're standing with the young people, letting them know they're not alone. We are with you."

"So often, we're segregated, on Sundays even, and this is a chance for us to come together," said church member Luke Schmidt.

A group of several hundred stood in the street and shut down traffic to symbolize what they want to interrupt in America.

Organizers say about 100 churches staged peaceful protests throughout the day in an attempt to send the message that America's justice system is flawed and needs to be fixed.

At St. Clement parish Sunday, Chicago's new Roman Catholic archbishop led his congregation in a gesture of solidarity with the protesters.

Archbishop Blase Cupich invited all to join him as he raised his hands in both prayer and a show of support.

"In solidarity to those who have hands raised these days in sense of frustration that the system does not seem to work for them, also sense of solidarity we're willing not just to pray with them but to reach out and do our part in solidarity to embrace them to carry the lambs who are at risk," Cupich said.

Most of the congregation joined Cupich and raised their hands during a moment of silent prayer.