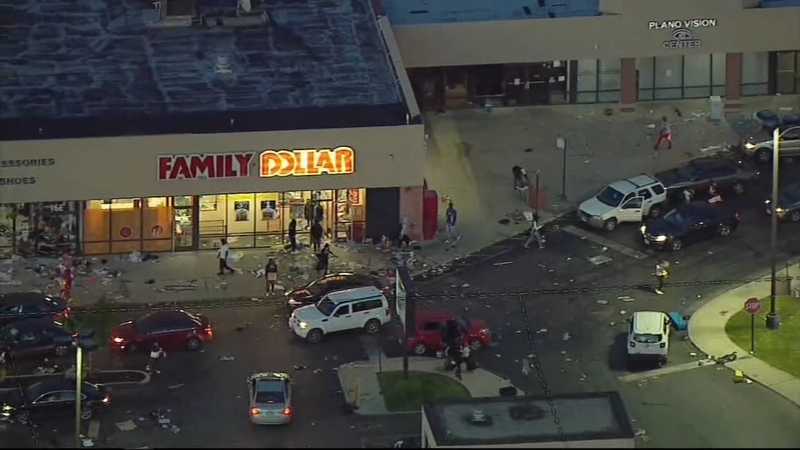 CHICAGO (WLS) -- Store owners continued to clean up Tuesday after hundreds of looters spent hours strippng the shelves cleans of the shopping center at 54th Street , just off the Dan Ryan Expressway on Sunday.

Speaking from the mall's parking lot, community leaders said the looters were hurting the cause that sparked the protests, the death of George Floyd.

"There's a way to resist constructively. Busting up gas stations in your community is not intelligent," said Jahmal Cole from My Block, My hood, My City.

Just down the street from the vandalized stores, Governor Pritzker and other leaders challenged looters to protest Floyd's death without destroying the businesses that support their community, including pharmacies that many depend on for medicine.

Governor JB Pritzker joined other community leaders to discuss the response to the unrest in the Chicago area in wake of the death of George Floyd.

"When pharmacies are looted, that is a potential tragedy when people have no access to their meds.," said Cook County Board President Toni Preckwinkle.

Cardinal Blase Cupich says looters are spreading what he calls "the sickness of violence." And other religious leaders say they understand the rage in the community over continued racism, but the reaction has been counterproductive.

Apostle Carl White of Victory Christian International Ministries said, "A lot of this rage has been locked up for years. But don't destroy your own communities, demonstrate peacefully."

The Governor says the first order of business is to rebuild and reopen, but he says the legislature will have to address the systematic racism in the next budget.
Report a correction or typo
Related topics:
politicschicagoloopblase cupichprotestjb pritzkergeorge floydu.s. & world
Copyright © 2021 WLS-TV. All Rights Reserved.
TOP STORIES
Benet Academy hires coach after deferring job offer over gay marriage
Body found confirmed to be Gabby Petito, death ruled a homicide
2 charged after woman who undergoes butt-lift procedure dies
Teen killed in Chatham shooting, CPD says
'Chicagohenge:' What it is and how you can see it
How you can win an Italian villa for only $35
Illinois unemployment notices from IDES cause confusion, concern
Show More
Dallas-area couple kicked out of restaurant for wearing masks
Man hurt in River North stabbing: CPD
Lightfoot 'disappointed' with CPS COVID-19 testing rollout
Palatine junior high among 18 IL National Blue Ribbon Schools
Thousands raised for Navy vet after broken scooter video
More TOP STORIES News