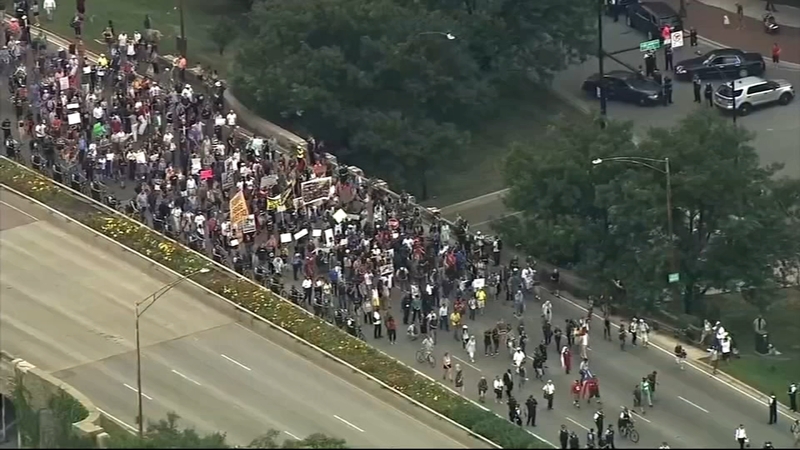 CHICAGO (WLS) -- An anti-violence march ended at Wrigley Field after shutting down Lake Shore Drive in both directions at Belmont for 35 minutes at the beginning of rush hour Thursday afternoon.

"It makes no sense with all this money being spent why is that we cannot reduce homicides by 75 percent in Chicago. Why is it that we cannot have one year where you have 100 less homicides in Chicago?" asked organizer Tio Hardiman.
Report a correction or typo
Related topics:
community & eventschicagolakeviewwrigleyvilleprotestwrigley fieldlake shore drivechicago cubstraffic
Copyright © 2022 WLS-TV. All Rights Reserved.
RELATED
How to get around the Lake Shore Drive anti-violence march
Lake Shore Drive shutdown and protest planned for Thursday
Group planning to shut down Lake Shore Drive not working with police, mayor
Anti-violence march to shut down part of Lake Shore Drive
TOP STORIES
Maryland man dies with more than 100 venomous snakes in his house
Laundrie claimed responsibility for Petito's death in notebook: FBI
Illinois reports 40,642 new COVID cases, 137 deaths
Retired CPD officer, 57, killed in Edison Park hit-and-run
'So much deceit': Brother of Lori Vallow speaks out on family divide
Nick Jonas, Priyanka Chopra welcome their 1st child
Car crashes into, wedged under back of semi on I-55 near Shorewood
Show More
Chicago's top doctor says end to COVID-19 mandates 'in our future'
Ford recalls 200K cars because brake lights can stay on
Multi-vehicle crash injures 2 people, 1 seriously, ISP says
1 killed, 1 critically injured in Hampshire facility explosion
'Wheel of Fortune' contestant gets her Audi after bonus round pause
More TOP STORIES News