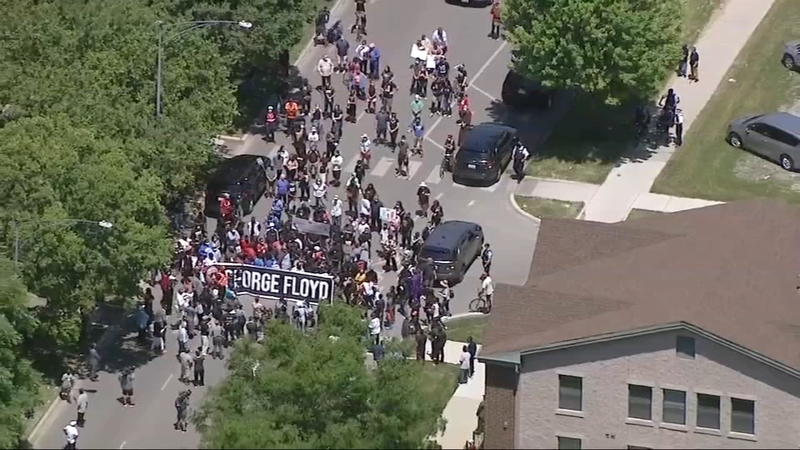 CHICAGO (WLS) -- Hundreds of people, including faith leaders and elected officials, marched through Chicago's West Side Friday, calling for peace and unity.

The peaceful march was held in the "Spirit of King," ending at the former Chicago home of civil rights icon Martin Luther King, Jr.

"Not only is change on the way, but change is right now," said Congressman Danny Davis (D-7th).

The march stepped off with passion.

"Put your fists in the air! This is an uprising," said Rev. Marshal Hatch Jr. "All over the world. From Asia to Europe, from Africa to the Americas. They are crying with one loud voice, 'Black lives will matter.'"

These same West Side streets were witness to pain, frustration, violence, and looting after the Minneapolis police killing of George Floyd.

The focus from marchers now is turning that pain into purpose for a more just world, a more just America, and a more just Chicago.

"I just want my sons for them to grow up to know that listen, your life do matter, and I want them to be part of history," said pastor William Walter.

Chicago and state leaders will join in a "Spirit of King" march Friday afternoon.

Hundreds marched toward an apartment where Dr. King once lived. He highlighted the disparity in housing along racial lines.

"This is our moment in time. An opportunity to free ourselves from that shadow of racism," said U.S. Sen. Dick Durbin.

The march for hope was held as the city and the nation grapples with a history rife with systemic oppression, inequity and racism toward black communities.

"I must report that Chicago is far from being the promise land," Dr. Martin Luther King said during the height of the civil rights movement of the 1960s.