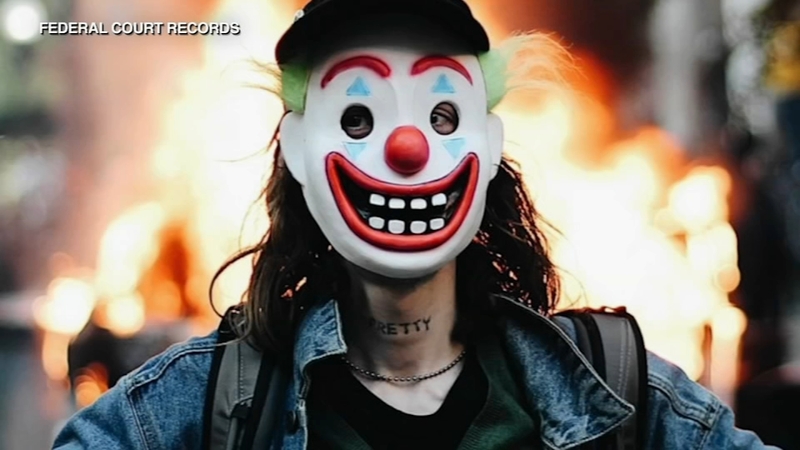 CHICAGO -- A Pilsen man who set fire to a Chicago police vehicle downtown while wearing a Joker mask during the widespread rioting and looting in the city in May 2020 was sentenced to prison time Wednesday.

Timothy O'Donnell, 32, was sentenced to 34 months, or just shy of three years, in prison by Judge Andrea Wood.

A spokesman for the U.S. Attorney said O'Donnell has already served two years and will get credit for time served.

The case against O'Donnell became among the most high-profile to result from the rioting and looting here in the wake of George Floyd's murder by then-Minneapolis Police Officer Derek Chauvin, as he was captured in jarring images wearing a clown mask amid the chaos.

O'Donnell previously denied he set fire to the police vehicle in the 200 block of North State Street on May 30, 2020. During a police interview, O'Donnell told authorities, "I do not stand for the exploitation of me and using me as a puppet to create an image," according to court records.

But in February, he pleaded guilty to obstructing law enforcement amid a civil disorder and admitted he used a lighter to ignite a piece of cloth that he put in the vehicle's gas tank.

His plea agreement acknowledged he owes $58,125 in restitution to the Chicago Police Department.

After O'Donnell's arrest, U.S. Magistrate Judge Gabriel Fuentes found that video of the incident "is indeed quite damning," in part prompting him to rule that O'Donnell should be held in custody while awaiting trial. Fuentes noted that, in addition to wearing a "Joker" mask, O'Donnell "self-reported that he has gone by the name 'The Riddler' in the past."

However, O'Donnell's lawyers scored a partial victory last summer when Judge Wood found that O'Donnell had invoked his right to counsel when authorities tried to get him to identify himself as the person wearing the mask during the riots. At one point, O'Donnell said, "I'm in fear. I'm not going to say anything further on that matter without a lawyer present."

Woods' ruling suppressed any statements O'Donnell made about whether he wore the mask after he made that comment.

Federal prosecutors charged O'Donnell on June 2, 2020, after investigators tied him to the incident through a "PRETTY" tattoo seen on the neck of the person wearing the mask. Video provided by a witness showed O'Donnell wearing the mask, holding a lit object and placing it in the gas tank of the CPD vehicle. Authorities said the vehicle burst into flames.

A photograph taken by a witness also showed O'Donnell handling the gas tank, according to the feds. In another, O'Donnell appeared to be sitting on the ground, wearing the Joker mask while the vehicle burned.

A third photograph apparently showed O'Donnell posing in the Joker mask in front of the burning car. In that one, a tattoo that says "PRETTY" can be seen on the neck of the person wearing the mask. A CPD photo of O'Donnell revealed the same tattoo.

A family member told law enforcement that O'Donnell lived in a room in an apartment in the 700 block of 19th Place. Authorities obtained a search warrant and searched the apartment. The feds say they found a Joker mask in a bedroom.