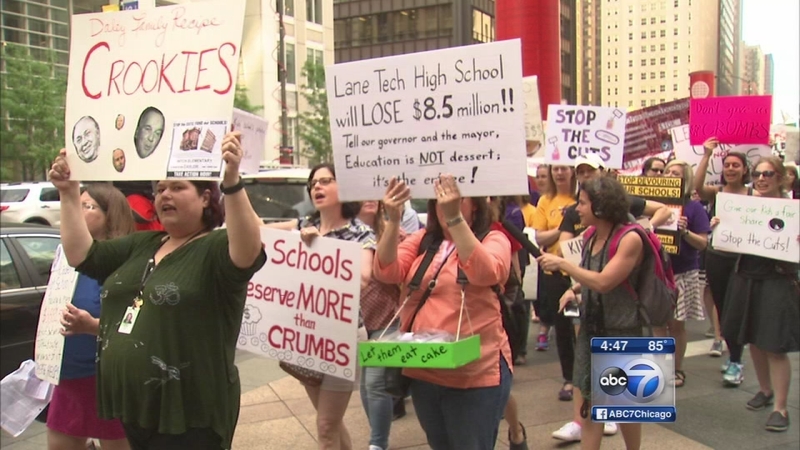 Parents held what they called a "billion dollar bake sale," a tongue and cheek way to play off of the CPS budget deficit and the old way of raising money for schools.

"When there is this amount of clamor as you see happening today, I think it could be a tipping point for all the community to finally wake up and say we need common sense, we need sustainable funding," said Rev. Kristian Johnson, a CPS parent.

Without the help an of equitable funding bill from Springfield, CPS has been warning parents and principals to expect cuts that could reach up to 40 percent.

"There is no question that without equal funding from state, these cuts will be extreme," said Forrest Claypool Wednesday at the monthly school board meeting.

"If the budget cuts go further, it would eliminate all of our arts programs, our dance program and probably a lot of the special ed positions as well," said Becca Blue, a parent of a CPS student.

Inside the board meeting, many criticized CPS for not doing its part in coming up with creative funding solutions.

"Those of you who have decided that this the board is useless, who have expressed thoughts on what we should do better. The fact is we need you and you help yourselves by taking this issue onto Springfield," said CPS Board President Frank Clark.

According to 49th Ward Alderman Joe Moore, that 5 percent difference is almost $500 million in funding alone, which would preserve current class sizes and teachers' jobs.

This discrepancy was also highlighted by CPS CEO Forrest Claypool, who led a "20 for 20" rally in Mount Greenwood last Wednesday.

In a statement, Claypool said: "On behalf of the administrators, teachers, parents and students of Chicago Public Schools, we stand strongly behind the efforts of the Illinois General Assembly -- particularly the Chicago delegation -- to bring additional resources to public schools. We applaud them for being champions of public education by taking these important steps to move toward greater stability for CPS and working to ensure a brighter future for our children."