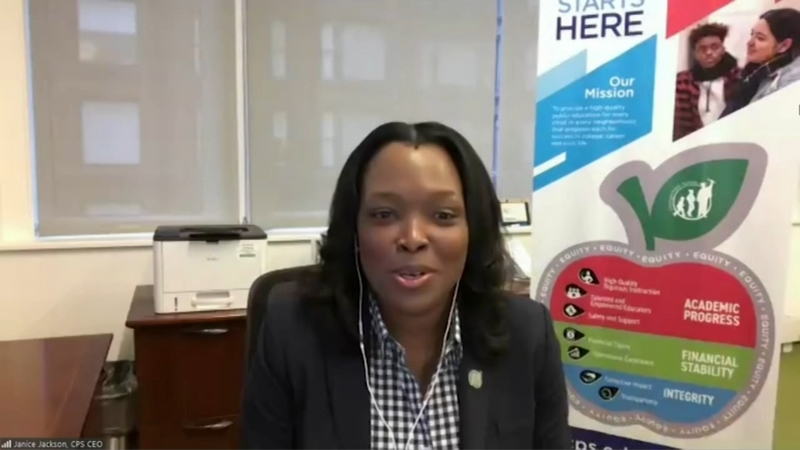 CHICAGO (WLS) -- A pandemic, a two-week teachers strike and a sexual abuse scandal: Dr. Janice Jackson faced one challenge after the other during her tenure as Chicago Public Schools CEO.

One day after Jackson announced she is calling it quits, she reflected on her accomplishments, regrets and preference for her replacement.

"I think internal and external candidates should be considered, but I'm a hometown girl, so I'm always going to root internal," Jackson said.

As a former student, teacher, and principal, Jackson was pure CPS. While she is leaving at the same time as two other top CPS officials, Jackson prides herself on the stability she brought to the job.

"When I started about one-quarter of principals left every year," Jackson said. "Now over 91% remain in their role after each year."

Chicago Public Schools CEO Dr. Janice Jackson announced Monday she is calling it quits after a 22-year career with CPS.

But stability is not what she experienced with the Chicago Teachers Union.

"I've been disappointed in some of the rhetoric and in some of the way our children and their education have been used to advance things that have nothing to do with the quality schooling," Jackson said.

Accusing CTU of interjecting politics with education, Jackson said she has no regrets giving teachers what has been called a "very generous" contract, but she does regret not getting students back to school sooner during the pandemic. As for what is shaping up to be the next school fight, an elected school board, Jackson supports it as long as parents are on it.

"What I worry about with an elected school board is that it could be co-opted by special interest groups, by the union and others," she said.