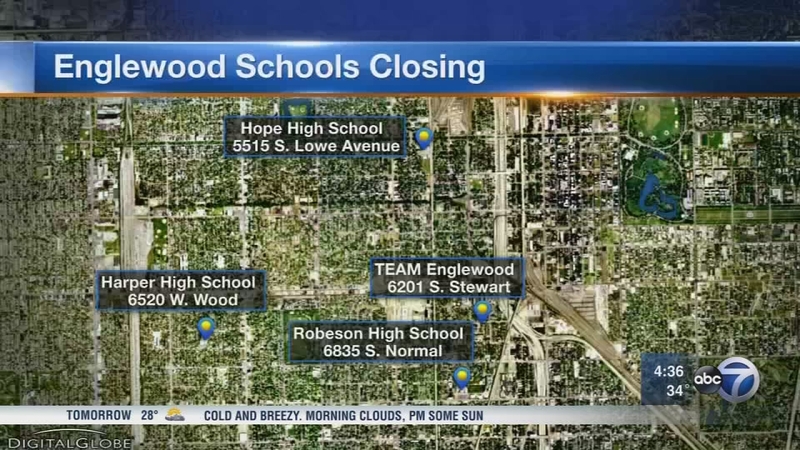 The Chicago Board of Education met Wednesday and heard public comment on the issue. The board is expected to vote on the closures in February.

Jasmine Curtis, a senior at Lindblom Math and Science Academy, voiced her worry about a lack of resources for these neighborhood schools, taking aim at Mayor Rahm Emmanuel.

"First, he starves the school of the resources they need to be successful. Then he opens a new charter school in the area to siphon students away from their neglected neighborhood schools. After that, Rahm declares schools 'underutilized' and slates them for closure," she said.

This proposal to shut down Harper, Hope, Robeson and TEAM Englewood high schools in June 2018 is because of each school's under-enrollment. The money saved would be used to help create a new $85 million high school for the Englewood neighborhood, according to CPS.

However, the new school wouldn't be completed until fall 2019, which means approximately 330 students would have to find another school to attend next year.

In addition, the new school would start its first year with only freshman, which means that none of the students that would be moved next year would not have an opportunity to attend the new school.

Elected officials from Englewood also traveled to City Hall on Wednesday to protest prior to the Chicago Board of Education's meeting.

Some lawmakers voiced their outrage over the plan, saying the possible closings come at the expense of black and Latino children.

"Low-income, black children continue to bear the brunt of CPS's failure with its reforms. It's long past time for CPS to become responsible by establishing a serious, long-term effort to evaluate programs based on scientific methods, evidence and sound educational services so that we stop damaging children," said state Sen. Jacqueline Collins, D-Chicago.