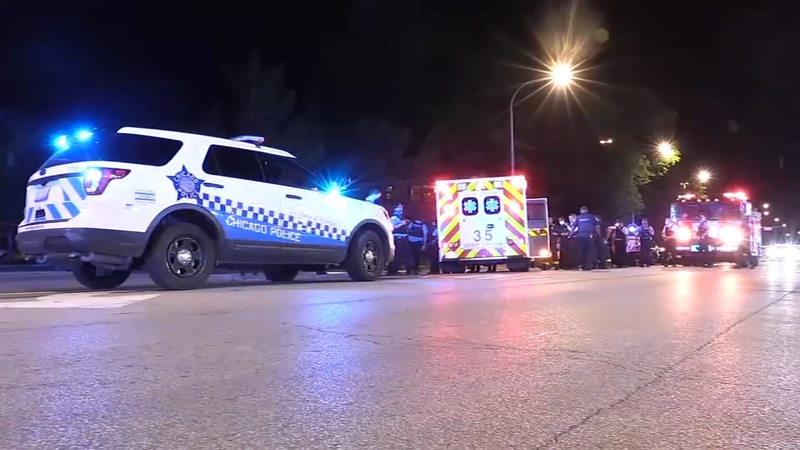 CHICAGO (WLS) -- A 5-year-old girl and two teen boys were injured Tuesday night in a drive-by shooting outside Wentworth Gardens Chicago public housing complex on the South Side, police said.

According to Chicago police, around 10:38 p.m. two teen boys, ages 15 and 16, were walking in a group in the 200-block of W. Pershing Rd. when an unknown occupant inside of a passing dark-colored vehicle fired shots, striking them both.

5-year-old Kaidence Lasenby was in her front yard digging in the dirt with five other children when the gunfire erupted.

Her mother, Tiana Turner, was right next to her, rushing to get the kids inside.

"I was dragging her in the house and she just kept saying, 'My leg! My leg!,' so I thought it came from me dragging her but my husband found out she had the gunshot wound to her leg," Turner said.

"It was like a movie. It happened so quick," Turner said. "Everybody was scattering like scrambling around."

Turner said the boys were in a group heading back to the apartment complex from the Mobile gas station across the street when the shooting started.

The 15-year-old suffered a gunshot wound to the face and leg, police said. He was transported to Comer Children's Hospital in fair condition.

The 16-year-old was shot three times in the leg, police said. He was transported to University of Chicago in fair condition.

Kaidence was hit by a stray bullet and her family rushed her to the hospital themselves. She was discharged from the hospital Wednesday and is now recovering at home with her family.

"This was a random car that just drove by. There was nobody there shooting at them. It was just oh you know we see somebody, shoot them," Turner said.

Police said they don't believe the boys were the intended targets.

Turner said drive-by shootings are common in the neighborhood and her family plans to move.

"We will not be here. I was planning on moving before this even happened, "Turner said.

Area One detectives are still investigating.

After the shooting, police said officers arrested an 18-year-old man at the scene after he allegedly had a gun in his waistband and was walking aggressively towards police.