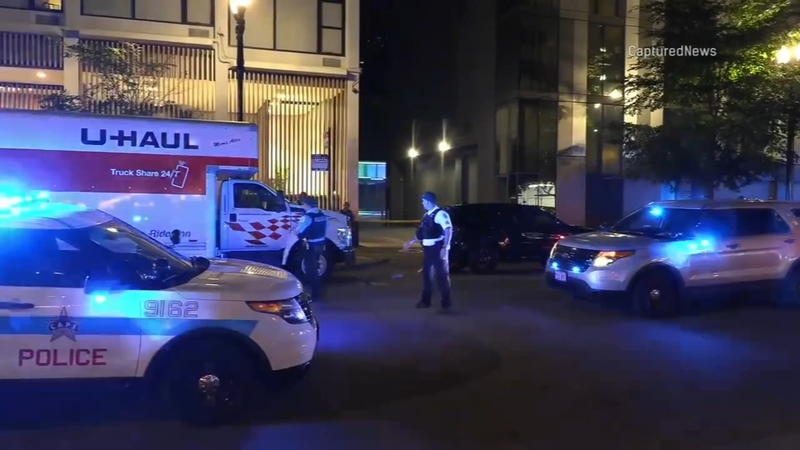 The man was standing on the sidewalk in the first-block of East Chestnut Street with his girlfriend when an armed man walked up to them and demanded the keys to his vehicle, according to CPD.

They were outside a residential high-rise building.

At some point, the suspect fired a shot, striking the victim in the neck before getting away in a different vehicle, a Honda SUV that was waiting nearby, Chicago police said.

Police were unable to provide more details on that getaway car Friday morning, but said they have surveillance video of it speeding away.

The victim was taken to Northwestern Memorial Hospital in critical condition.

No one else was hurt.

Lance Houia heard the gunshot and started recording the scene on his cell phone.

"I saw his girlfriend screaming and crying, and he was between the U-Haul and the truck," Houia said.

Houia heard the incident before the gunfire, too, as the victim dropped off his girlfriend.

"He was saying goodbye. The guy ran up and said 'give me your keys' and the guy said 'are you kidding me?' and then without hesitation shot him in the neck," he said.

Some witnesses said they thought they heard a crash or fireworks, but quickly realized it was gunfire. Some ran out to help the victim.

"We thought it was a firecracker, so we kind of didn't think anything of it, and then we heard a lot of screaming," neighbor Lorraine Miller said.

Miller added that her neighbor helped the couple.

"She helped the girlfriend help her boyfriend compress on the neck so that he didn't bleed until the ambulance came, so a lot of angels out there," she said.

Emily Voveris also lives near the scene and said police were there within seconds.

"They got here in under a minute, and then by the time they got here someone was screaming for an ambulance," she said. "It was unbelievable how fast it all happened for what seemed like no reason."

But this adds a growing list of carjackings or attempted carjackings across the city recently.

As of June 10, there have been 673 carjackings in Chicago, according to CPD data. That's up 68% on the 400 that occurred during the same period last year.

Alderman Brian Hopkins said part of the problem is there are not enough police.

"We have a carjacking task force, and we have a strong downtown police presence," he said. "But right now we are down patrol officers. We have had retirements and cops moving onto other jobs. We have not been able to recruit and train at what we are losing. Going to 12-hour shifts and no days off is not sustainable. They're being pushed to the limit and cannot take it anymore."

"I mean it's sad. I get that it's hard right now, but like everyone is struggling, so, like, taking that out on somebody else, it's just not gonna solve anything," Voveris said.

It also comes as the heavy police presence that was once in place in the Mag Mile area has thinned out.

"There's a lot of friendly people in this city, but I do know that after years, you end up being vigilant because stuff happens," Miller said.

Police said they're investigating, and so far no one is in custody.