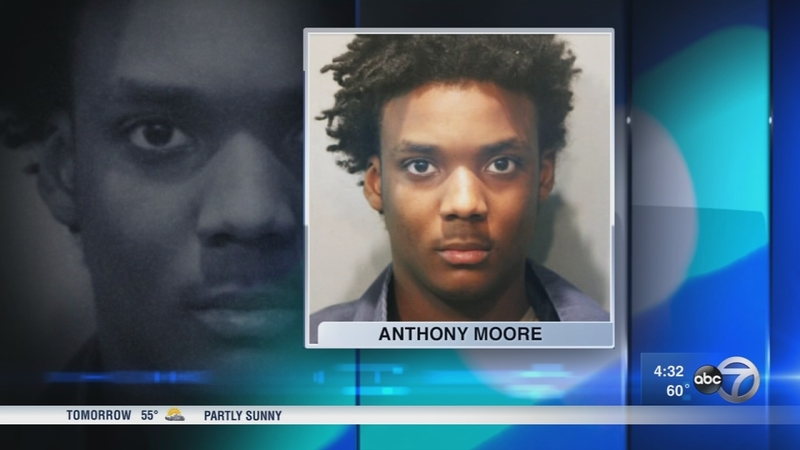 CHICAGO (WLS) -- A Chicago man has been sentenced to 12 years in prison in the 2016 shooting death of Arshell Dennis III, the son of a Chicago police sergeant.

Anthony Moore was 18 when he was charged with first-degree murder in the killing, almost a year after it took place.

"Every officer will tell you that their greatest fear beyond what could happen to them on the job is when violence they fight so hard to prevent hits home," former Chicago Police Superintendent Eddie Johnson said at the time. "Every officer in this department took his murder personally, vowed not to stop until we found his killer."

Arshell "Trey" Dennis III was home from college to surprise his sick mother for her birthday.

Just after midnight on Aug. 14, 2016, police said he was sitting on a porch with a 20-year-old man, who neighbors described as a friend, outside a home in the 2900-block of West 82nd Street. That's when a gunman walked up and opened fire. The victim was shot in the chest. He died at Little Company of Mary Hospital at 12:45 a.m.

His father, Arshell "Chico" Dennis, was a long-time CPD officer and a close, personal friend of Johnson. They served together as patrol officers in the 6th District.

"Officer Dennis dedicated his life to make this city safer, and his son Arshell was a good kid, making his parents proud and studying for a promising future as a journalist," Johnson said in a statement.

Dennis III was a graduate of Urban Prep Academy and a junior at St. John's University in New York City. He was slated to go back to school the same day he was killed.

"Our family is deeply saddened by this tragic and senseless shooting," a statement from the Dennis family said. "The loss of our son is stunning and painful. Trey was smart, funny and the light of our lives."

Terri Bachstrom, who lives on the same block as the Dennis family, said she knew the victim from working as a Chicago Public Schools lunchroom attendant. She said he was a quiet, well-mannered and great kid.

"He wasn't in a gang. He wasn't affiliated with any of the nonsense that's going on in Chicago," Bachstrom said. "He wasn't one of those kids. He was just a different child all around the board, so I don't understand why somebody would come in and shoot like that."