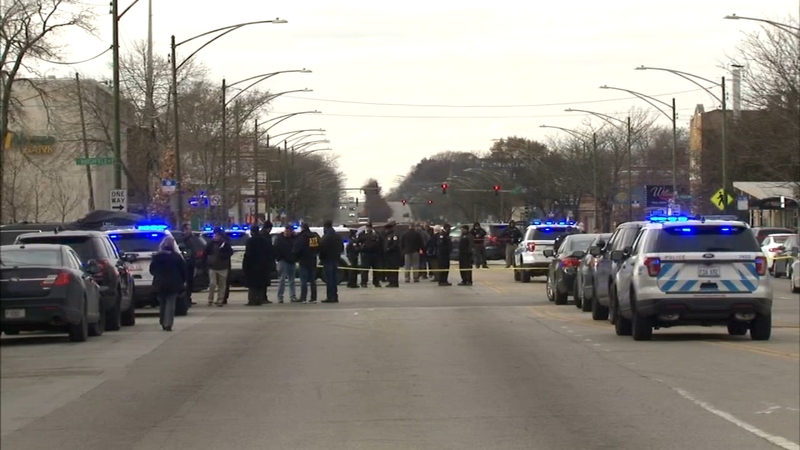 CPD officer shot in back, saved by bulletproof vest in Gresham

CHICAGO (WLS) -- Less than 24 hours after one of their own was killed in the line of duty, a Chicago police officer was shot while doing his job on the city's South Side.

A 6th District tactical officer and his partner stopped someone for suspicious behavior in the 8700-block of South Ashland Avenue just before 11 a.m. Tuesday, police said. The male suspect took off running.

"The officer started to give chase while his partner officer went in front to cut offender off. At that time, the offender turned, pointed a weapon at the officer. The officer and offender exchanged gunfire," Chicago Police Superintendent Eddie Johnson said.

Johnson said the injured officer was able to recover the suspect's gun. The officer's partner handcuffed the gunman, checked to see where he had been shot and called for medical assistance.

Johnson and Chicago Mayor Rahm Emanuel said it should not be lost any Chicago resident that despite the deadly shooting at Mercy Hospital on Monday, officers went to work on Tuesday.

"Even though we have all been affected by last night, here are two officers, less than 24 hours later, doing their job. Stopping somebody that, in the end, did have a gun," Emanuel said.

Chicago Police Superintendent Eddie Johnson detailed the events of Tuesday's police-involved shooting in Gresham and had strong words for those who criticize the police.

"Listen, I just want to highlight something. As much criticism as police - not just in Chicago, but all across this country - face ... The events of last night were tragic, horrific, but you see these officers come out here today, put on that vest, put on that vest, put on that star and go out and do what we do every day. That's serve and protect the citizens of this city, despite what happened.
"You ask yourself, who goes to protect a complete stranger? Never knew the person, but they go to do that. The CPD. That's who does it. We don't question it because that's what we do. I just think it's a shame that we get so much criticism, and scrutinized for everything that we do. The majority of these officers are out here - not just here, but all across this country - doing this job because that's what we took an oath to do.
"I think today illustrates that. These officers could have pulled back. You know, that nonsense about 'officers are on their heels and not interacting.' There's a gang conflict going on in the 6th District. That guy was acting suspiciously. Based on their training and their instincts, they put a spot on him. Their instincts turned out to be correct.

"So those officers today and yesterday, like the president of FOP said, they are heroes. It takes a certain type of person to do that - to run into the face of gunfire," Johnson said.

The suspect was transported to Advocate Christ Medical Center, Johnson said. His condition was not immediately known.

The officer was transported to Little Company of Mary Hospital, where Johnson and Emanuel met with him and his family. The superintendent said the officer suffered some bruising, but was in good spirits and is expected to make a full recovery.