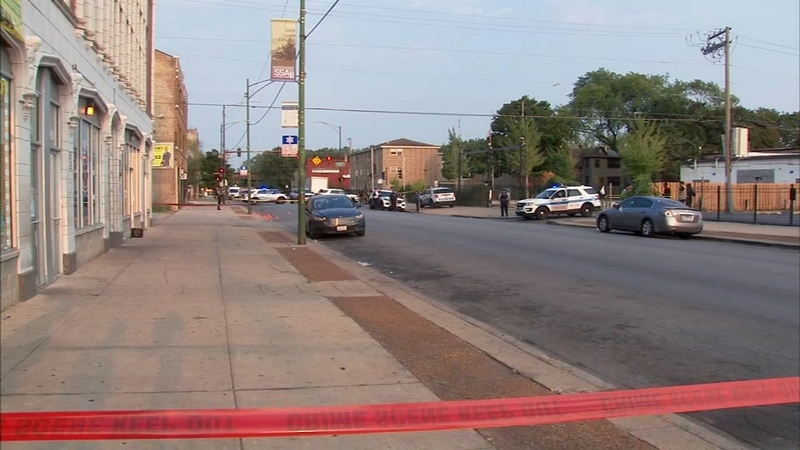 A 12-year-old boy was found dead Saturday morning in the South Chicago neighborhood.

A witness found the boy unresponsive with a gunshot wound to the head about 10:30 a.m. in the 8000-block of South Bennett Avenue, according to preliminary information from Chicago police. He was pronounced dead at the scene.

A 36-year-old woman was taken into custody in connection with the shooting, police said.

In one of two mass shootings this weekend, a woman was killed and five others were shot, including a 15-year-old girl, Saturday night in West Pullman.

The group was outside walking towards their vehicles about 9:40 p.m in the 300-block of East Kensington Avenue when someone inside another vehicle fired muliple rounds in their direction, police said.

A 42-year-old woman was shot in the arm and armpit and was taken to the University of Chicago Medical Center, where she was pronounced dead, police said. She hasn't been identified.

A teen girl, 15, was struck in the arm and transported in fair condition to Comer Children's Hospital, police said.

A third man, 22, was suffered gunshot wounds to the arm and leg and was transported to Roseland Community Hospital in fair condition, according to police.

A fourth man, 31, was grazed in the head and taken to Little Company of Mary Hospital in Evergreen Park, where he was listed in fair condition, police said.

Hours earlier, a man was killed and three others were hurt in a drive-by shooting Saturday afternoon in Grand Crossing on the South Side.

The men were standing outside about 4:55 p.m. in the 900-block of East 79th Street when a dark-colored SUV drove by and someone from inside fired shots, police said.

A 24-year-old was shot in the head and was taken to the University of Chicago Medical Center, where he was pronounced dead, police said. He hasn't been identified.

Another man, 28, was shot in the leg and was taken in good condition to the University of Chicago Medical Center, police said.

A 26-year-old was struck in the ankle and another, 27, was shot in the leg, police said. They were both taken to Christ Medical Center in Oak Lawn in good condition.

Two people were shot, one fatally, Sunday in Lawndale on the West Side.

A man, 54, was found dead in a vehicle with multiple gunshot wounds throughout his body near where a 42-year-old woman was shot about 4:15 a.m. in the 2700-block of West Flournoy Street, police said. His name hasn't been released yet.

The woman was shot once in her left knee and self-transported to Mount Sinai Hospital, where her condition was stabilized, police said.

A woman was killed while sitting in a vehicle in Chatham on the South Side.

The 34-year-old was sitting in the driver's seat of a vehicle with a group of people in a parking lot about 1:25 a.m. in the 8700-block of South Lafayette Avenue when she was shot in the head, Chicago police said. She died at the University of Chicago Medical Center.

On Friday, a person was shot dead in Englewood.

A male, whose age wasn't immediately known, was near the sidewalk about 5:30 p.m. in the 7200-block of South Yale Avenue when someone opened fire, striking him in the armpit and hand, police said.

He was taken to the University of Chicago, where he was pronounced dead, police said.

In nonfatal attacks, two boys were shot while they were standing on a porch in Austin on the West Side.

They were on the porch about 10:30 p.m. Friday in the 5800-block of West Augusta Boulevard when someone inside a silver-colored SUV fired shots, police said. The boys, 12 and 13 years old, were struck in the leg and taken to Stroger Hospital in good condition.

Hours later, a 16-year-old boy was wounded when someone shot him in Gresham on the South Side.

The teen was walking through a gas station about 12:55 a.m. Saturday in the 7600-block of South Green Street when he was shot in the leg, police said. He was taken to the University of Chicago Medical Center, where he was listed in good condition.

A 17-year-old boy and a woman were stuck by gunfire Saturday night in Bronzeville on the South Side.

The teen boy was walking with the woman about 7:15 p.m. when he got into a verbal altercation with a male suspect across the street who pulled out a gun and fired shots in the 700 block of East Oakwood Boulevard, police said.

The teen was struck in the hand and was taken in good condition to the University of Chicago Medical Center, police said. The woman, 35, suffered graze wounds to the back and shoulder and refused medical attention.

A 17-year-old boy was wounded in a shooting Saturday in Princeton Park.

He was inside of a home about 2:50 p.m. in the 9100-block of South Wentworth Avenue when someone he knew fired shots, striking him in the foot, police said.

The teen was taken to Roseland Hospital in good condition, police said.

Detectives were questioning a person of interest.

Two people were shot and critically wounded in Lawndale Sunday on the West Side.

The 27-year-old was struck twice in the groin and once in the abdomen, while the 29-year-old suffered a gunshot wound to his chest and arm, police said.

Both were taken to Stroger Hospital, where they were listed in critical condition, police said.

Last weekend, six people were killed and at least 61 others were wounded in citywide shootings over the holiday weekend.