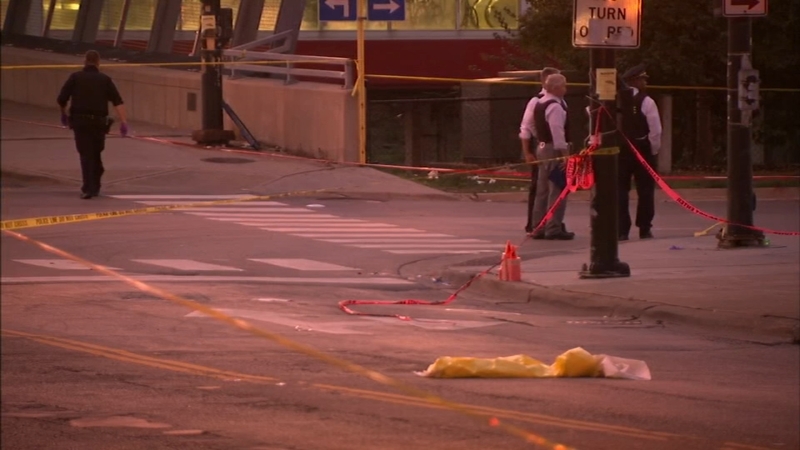 CHICAGO (WLS) -- Two teenagers have died after they were shot Wednesday afternoon near the 35th Street Red Line station, according to Chicago police.

Police Superintendent Eddie Johnson said preliminary investigation indicated there was a verbal altercation in the area of Youth Connections Charter School, an alternative school for 16 to 21-year-olds, located near the intersection of 35th and State Streets. Johnson said people fled the area westbound down 35th Street and ended up near the intersection of 35th and LaSalle Streets, where gunfire erupted.

Johnson said there were up to three gunmen and two male victims. The 17-year-old victim was shot in the chest, abdomen and face and was transported to Stroger Hospital. The 16-year-old was taken to University of Chicago Hospital.

Both teens were pronounced dead at about 6 p.m.

Police said the offenders then fled in a Beige Ford Explorer. That car was found burned in the 100 block of West 68th Street Wednesday morning, police said.

Johnson said police were working to confirm whether the two victims were students at the high school.

"We have a very good witness to this particular incident so we have some very good leads," Johnson said of the investigation.

No offenders are in custody.

With the Sox-35th Red Line station, the Metra station and Guaranteed Rate Field, Johnson said the area is highly trafficked.

"We have a high volume of police officers, both on-duty and off-duty, that travel this area," he said.

White Sox fans like Linda Kent headed to the last home game of the season passed an active crime scene on their way to the ballpark.

"It seems like things are getting kind of out of control. Almost anybody can get a gun," she said.

Johnson said it's not known what caused the confrontation.
"What we can't predict is what will touch off situations like this," he said. "Social media is a huge driver of this type of violence, especially with the younger folks."

He also said it takes more than police to address the city's violence.