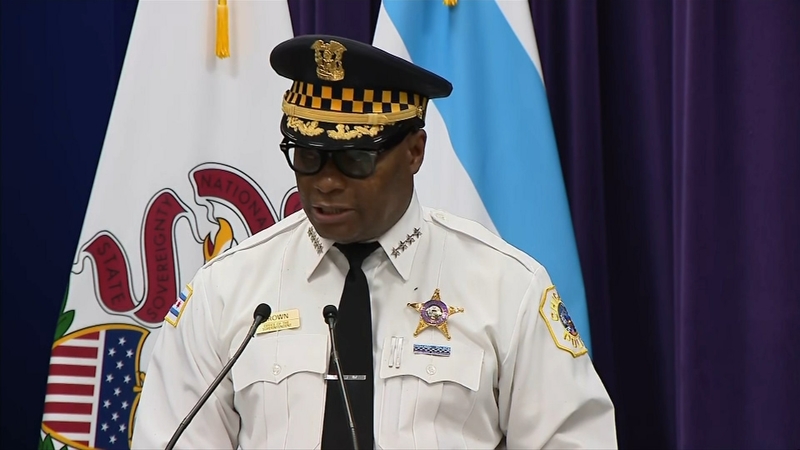 CHICAGO -- There were 31 people shot, five fatally, in shootings in Chicago over the weekend.

A 14-year-old boy was fatally shot Sunday evening in Roseland on the Far South Side. Just after 5 p.m., the boy was shot multiple times in the 200-block of West 110th Place, according to Chicago police and Chicago fire officials. He was pronounced dead at the scene, police said.

A 22-year-old man was fatally shot Saturday in Homan Square on the West Side. About 1:40 p.m., he was standing on the corner in the 3800-block of West Roosevelt Road, when someone approached him on foot and fired shots, police said. The man was struck in the head and rushed to Mt. Sinai Hospital, where he was pronounced dead, police said. His name has not yet been released.

About 20 minutes later, a man was fatally shot in a drive-by in Pilsen on the Near West Side. About 2 p.m., he was standing outside in the 900-block of West 19th Street, when a vehicle drove by, and someone inside opened fire, police said. He was struck in the abdomen, and taken to Stroger Hospital, where he was pronounced dead, police said. His name has not yet been released.

A person was killed in a shooting Sunday afternoon in the South Shore neighborhood. Quinhon T. Douglas, 19, was shot in the head about 4:40 p.m. in the 6700-block of South Merrill Avenue, police said. He was pronounced dead at the scene, police and the Cook County medical examiner's said.

In nonfatal attacks, three people were hurt in a shooting Saturday afternoon inside a Chatham gas station. About 3:45 p.m., someone fired shots into the gas station in the 8600-block of South State Street striking the three males, police said. A 20-year-old man was struck in the thigh and a 26-year-old man suffered gunshot wounds to the thigh and buttocks, police said. A third male, whose age was unknown, also suffered a gunshot wound. All three victims were taken to the University of Chicago Medical Center in good condition, police said. The 20-year-old man was not the intended target of the shooting, according to police.

A Chicago police officer shot a person after they were fired upon during an "investigative stop" on the West Side, officials say. No officers were struck by gunfire. About 8:30 p.m., officers were conducting a stop in the 200-block of North Kostner Avenue when a male fled on foot, police said. Officers were then shot at and returned fire striking the male, according to police. He was transported to an area hospital with non-life-threatening injuries.

Two teenage boys were wounded in a shooting Friday afternoon in Fernwood on the South Side. The teens, 15 and 16, were on the sidewalk about 5 p.m. in the 10000-block of South Parnell Avenue when someone opened fire, police said. They were both shot in the leg and were taken in good condition to Christ, police said.

About 45 minutes later, a 17-year-old girl was grazed by a bullet in Englewood on the South Side. She was stopped at a red light about 5:45 p.m. in the 6000-block of South State Street when another vehicle pulled up next to her and someone from inside fired shots, police said. She was grazed in the back and was taken to the University of Chicago in good condition, police said.

A fourth teen, a 16-year-old boy was shot Saturday in East Garfield Park on the West Side. About 1:15 p.m., he was walking in the 3400-block of West Lake Street, when he heard shots and felt a pain, police said. He was struck in the leg and taken to Stroger, where he was in good condition, police said.
A few hours later, a fifth teen, also 16, was hurt in a shooting Saturday afternoon in Park Manor on the South Side. About 4 p.m., the teen was sitting in a vehicle in the 7000 block of South Wabash Avenue when another vehicle pulled up alongside and someone inside fired shots, police said. He was transported to St. Bernard Hospital in good condition, police said.

A sixth teen was hurt in a shooting Sunday evening in Albany Park on North Side. About 5:20 p.m., the 17-year-old was near an alley in the 5000-block of North Lawndale Avenue when a male approached him and opened fire, police said. He was struck in the stomach and was transported to Illinois Masonic Medical Center in good condition, police said.

At least 23 others were wounded in citywide shootings from 5 p.m. Friday to 5 a.m. Monday.

Last weekend, there were 21 people shot, four fatally, in Chicago.