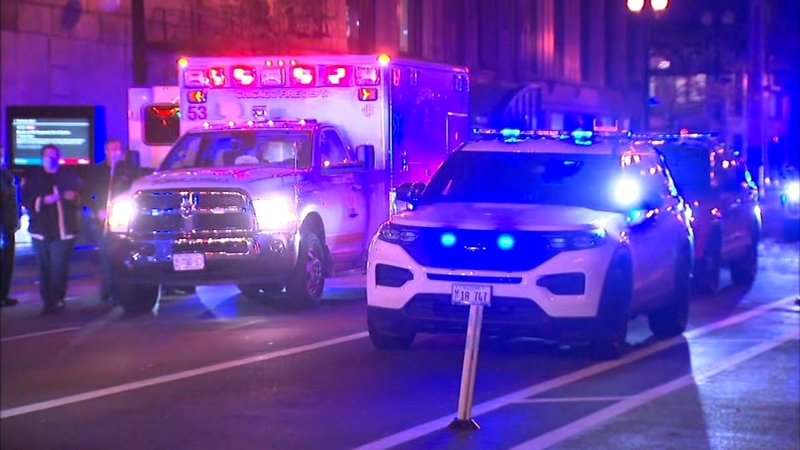 CHICAGO -- Hours before an Arlington Heights man stabbed a CTA worker and beat a Chicago police officer on a Blue Line platform in the Loop, he was arrested and released from custody in Forest Park for attacking a group of people at a house of worship with a drumstick, Cook County prosecutors said Tuesday.

In 2012, Burage attacked a CTA guard with a stolen sword, cutting the guard's ear and arm at a CTA station in the South Loop, prosecutors said.

Burage was found not guilty of attempted murder by reason of insanity in that case, prosecutors said.

Prosecutors Tuesday described Burage as "a danger to the community" while an assistant public defender pointed out to Judge Mary Marubio that he "appears to have a history of mental health issues."

On Sunday, after Burage was arrested for the attack in Forest Park, he was released on his own recognizance from a police station in the western suburb.

Later that day at 5:40 p.m. Burage got into a fight on the Blue Line platform in the 300-block of South Dearborn Street, prosecutors said.

Burage's rival appeared to be antagonizing him and hitting him with a belt or chain, prosecutors said.

During that fight, Burage allegedly pulled out a knife and threw the weapon and bicycle at the person. Both the bicycle and the weapon landed on the CTA tracks. The person Burage was fighting with eventually left the station before Burage went onto the tracks to recover the knife, prosecutors said.

Burage then went on to stab the 44-year-old CTA worker who had witnessed the confrontation, prosecutors said. Burage allegedly stabbed the CTA worker multiple times, causing the man to fall to ground during a struggle with Burage. Burage continued to slash the CTA employee several times in the face until commuters came to help, prosecutors said.

When two police officers arrived, Burage picked up a guitar that was on the platform and smashed it against a support pillar before hitting one of the officers with the neck of the musical instrument, prosecutors said.

Other officers came to the scene and Burage was take into custody.

Burage later admitted to police he was trying to kill the CTA worker because he believed he had sided with the person he had been fighting with, prosecutors said.

The CTA worker was taken to a hospital where he was treated for lacerations and a fractured jaw, prosecutors said.

The incident was captured by CTA surveillance cameras and a witness recorded portions of it on a cellphone, prosecutors said.

Burage served in the U.S. Marine Corps from 2000-2004 and was honorably discharged, according to his assistant public defender.

He is expected back in court Nov. 24.